Interestingly, in our country (India) we got both. Under dam title we got Heerakud, Nangal etc. are dams whereas Prakasham on Krishna, can be  sited as a barrage. Some of the great dam’s world over for their height and formation of artificial lakes behind them are Colorado in US, Aswan dam in Egypt can be listed. At present let us investigate.

At first glance, we may confuse a barrage and a dam. Both are built across large water bodies to control the water level. However, they have very different construction processes and uses. We’ve put together some fast facts about the difference between a dam and a barrage and you’ll also learn about the largest dam that exists in the world today. Can you guess which country it’s in?

What is a Dam?

A dam is a barrier that is constructed across a river valley or water source.

A dam creates a deep reservoir of water that can be stored and reused at a later date. These uses can include irrigation, water supply or even electricity generation. A dam is usually an impressive feat of construction, as its sheer height is what keeps the water from moving up and over it. Unlike a barrage, a dam is built for the sole purpose of storing water and to raise the level of water contained within it.

What is a Barrage?

A barrage is a type of dam; however, instead of being a massive concrete wall that the water can’t flow over, the barrage is full of gates.

These gates are opened and closed to directly control the amount of water that passes through it. Having a barrage instead of a dam means that the flow of water can be kept stable for its intended purpose, such as irrigation to nearby cities, towns, or farmlands. Unlike a dam, the water stored behind a barrage depends on the height of its gates and not the height of the entire wall. The flow and level of water are easily monitored because the gates can be easily manipulated.

A barrage is constructed when water doesn’t need to be stored but rather diverted. For this reason, the barrage is usually built across a flat and relatively slow-moving river. Unlike a dam, which will raise waters nearly to its height, a barrage will only raise the water level by a few feet. This is also useful for navigation, because a barrage can increase the depth of a river by a few feet.

Unique Construction: A dam is built with numerous spillways that allow excess water to flow through it to the river below. This keeps the dam from being overtaken when the reservoir or lake reaches the top of the dam.

Dams have gates just as barrages do, but the difference is that dams have the gates and sluices at the top to prevent flooding and spillage.

In barrages, there are gates from the top down to the bed of the river. This allows for a greater capacity of storage and controlling the flow of water. Barrages are particularly common in rivers that see a large amount of flooding.

The Largest Dam in the World: The largest dam in the world is the Three Gorges Dam in China. The Three Gorges Dam stretches across the Yangtze River and is a whopping 1.4 miles wide and 630 feet tall. The dam can hold back more than five trillion gallons of water.

The Three Gorges Dam gets its name from the three gorges at the foot of the nearby Wu Shan Mountains. The project itself has always been shrouded in controversy when its construction in 1992 displaced 1.13 million people that were living in the 244 square miles that was subsequently flooded by the dam. The floodwaters flooded entire towns, farmland, and even historical sites. Not only that, but the sheer weight of the water has reportedly been eroding the shores of the river. 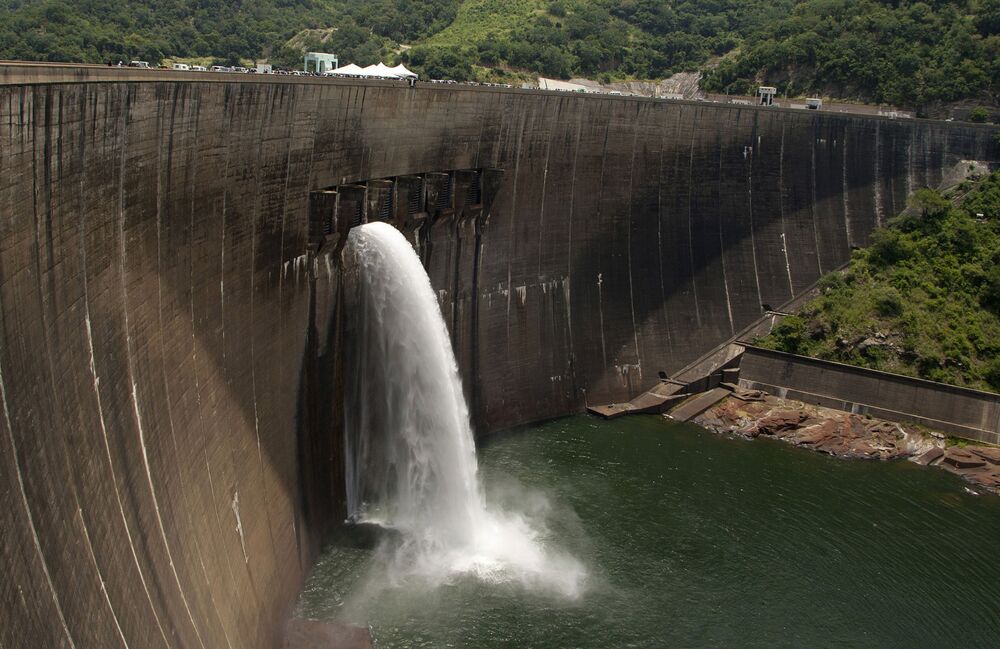 Landslides and toxic buildup are cited as growing concerns around the dam, but the government and industry say it’s necessary to support growing energy demands in China. Deadly flooding on the Yangtze River is also controlled by the dam. During the 2010 typhoon that struck the area, the Three Gorges Dam withstood 18,492,043 gallons of water per second.

Now we will study in brief different types of dams. The are in all 12 types of dams on Rivers in USA. We will learn each type of dam with diagrams below

Coffer Dam: A temporary structure enclosing all or part of the construction area so that construction can proceed in the dry. A diversion cofferdam diverts a stream into a pipe, channel, tunnel, or other watercourse.

Diversion Dam: A dam built to divert water from a waterway or stream into a different watercourse.

Embankment Dam: Any dam constructed of excavated natural materials or of industrial waste materials. Earth dam . An embankment dam in which more than 50 percent of the total volume is formed of compacted earth material generally smaller than 3-inch size. Hydraulic fill dam .

An embankment dam constructed of materials, often dredged, which are conveyed and placed by suspension in flowing water. Rockfill dam. An embankment dam in which more than 50 percent of the total volume is composed of compacted or dumped cobbles, boulders, rock fragments, or quarried rock generally larger than 3-inch size.

Hydropower Dam: A dam that uses the difference in water level between the reservoir pool elevation and the tailwater elevation to turn a turbine to generate electricity.

Industrial Waste Dam: An embankment dam, usually built-in stages, to create storage for the~ disposal of waste products from an industrial process. The waste products are conveyed as fine material suspended in water to the reservoir impounded by the embankment.

The embankment may be built of conventional materials but sometimes incorporates suitable waste products. Mine tailings dam. An industrial waste dam in which the waste materials come from mining operations or mineral processing.

Masonry dam: Masonry dams are dams made from masonry – mainly stone and brick, sometimes joined with mortar.[1] They are either the gravity or the arch-gravity type. The largest masonry dam in the World is Nagarjuna Sagar Dam , Andhra Pradesh & Telangana, in India.

Nangal Dam: Nangal Dam is another dam in Punjab downstream of Bhakra Dam. However, sometimes both the dams together are called Bhakra-Nangal Dam though they are two separate dams.

In October 1963, at the ceremony to mark the dedication of the Bhakra–Nangal project to the nation, Prime Minister Nehru said, “This dam has been built with the unrelenting toil of man for the benefit of mankind and therefore is worthy of worship. May you call it a Temple or a Gurdwara or a Mosque, it inspires our admiration and reverence”. On 22 October 2013, the Government of India approved the release of a commemorative stamp to mark the 50th anniversary of the Bhakra Dam. As how successful India was at that time that it was the only dam in Asia which could produce 1500 MW power.