Washington: After nearly two years of conflict between the world’s two dominant economic powers, the United States and China signed a trade truce on Wednesday, letting businesses around the globe breathe a sigh of relief.

US President Donald Trump, who currently faces an impeachment trial and then a tough reelection bid later this year, called the agreement “momentous.”

But tariffs on hundreds of billions of dollars in imports remain in place, leaving American consumers and businesses to foot the bill.

The “phase one” agreement includes pledges from China to beef up purchases of American crops and other exports, provides protections for US technology, and new enforcement mechanisms.

“Today, we take a momentous step, one that’s never taken before with China,” that will ensure “fair and reciprocal trade,” Trump said at the White House signing ceremony.

“Together, we are righting the wrongs of the past.”

As Trump ambled through a lengthy commentary on the deal, punctuated by introductions of many officials involved in the negotiations, major networks switched away from the White House to the Congress to show the presentation of articles of impeachment in the Senate as the first step towards a trial.

The easing of US-China trade frictions has boosted stock markets worldwide in recent weeks, as it takes the threat of new tariffs off the table for now.

Trump signed the deal with China’s Vice Premier Liu He, who has led Beijing’s negotiations with US Trade Representative Robert Lighthizer and Treasury Secretary Steven Mnuchin.

“Negotiations were tough on us,” Trump said, but they led “to this really incredible breakthrough.”

But he said he will only remove tariffs “if we’re able to do phase two.”

“I’m leaving them on. Otherwise we have no cards to negotiate with.”

In a letter to Trump read by Liu, the Chinese leader said the deal is “good for China, for the US and for the whole world.”

However, the most difficult issues remain to be dealt with in “phase two” negotiations, including massive subsidies for state industry. 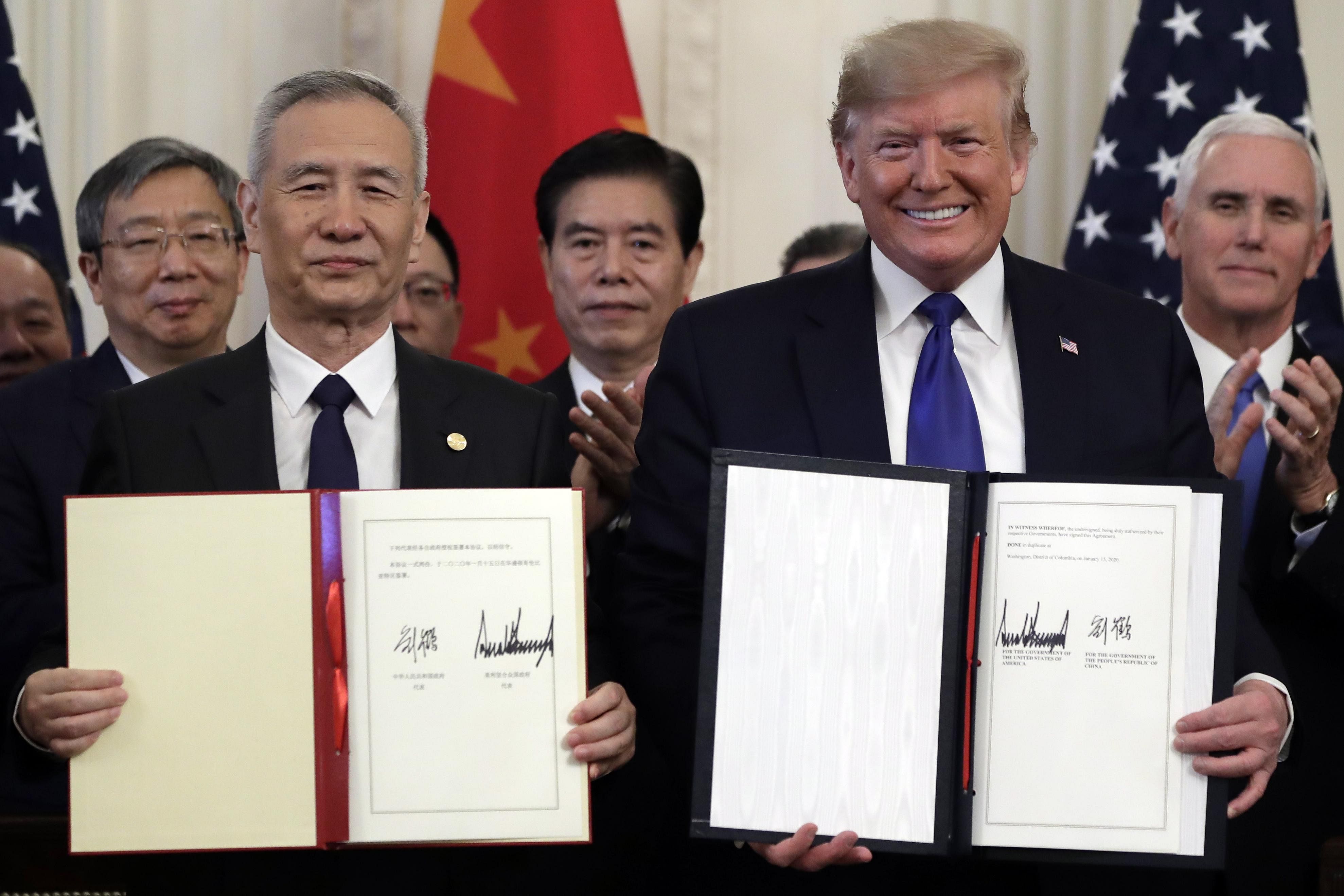 Prior to the signing, Mnuchin said the deal puts pressure on Beijing to stay at the negotiating table and make further commitments — including on cyber-security and access for US services firms to the Chinese markets — in order to win relief from the tariffs that remain in place.

“In phase two there will be additional roll backs,” Mnuchin said on CNBC early Wednesday. “This gives China a big incentive to get back to the table and agree to the additional issues that are still unresolved.”

Still, elements of the deal the administration has touted as achievements effectively take the relationship between the two powers back to where it was before Trump took office.

But the trade expert with the Peterson Institute for International Economics, cautioned that “we will continue to see the impact of this in slower investment and higher business costs.”

After announcing the deal on December 13, the United States canceled a damaging round of new tariffs that were due to kick in two days later and also promised to slash in half the 15 percent tariffs on $120 billion imposed September 1 on consumer goods like clothing.

What’s in a deal?

As part of the accord, Beijing agreed to import an additional $200 billion in US products over two years, above the levels purchased in 2017, before Trump launched his offensive, including an additional $32 billion in agricultural goods.

Trump has repeatedly touted the trade pact as a boon for American farmers, who were hit hard by the tariff war.

Soybeans exports to China plunged to just $3 billion from more than $12 billion in 2017 and the Trump administration paid out $28 billion in aid to farmers in the last two years.

But many economists question whether US farmers have the capacity to meet that demand.

And Lovely raised a question about the wisdom on relying so heavily on the Chinese market.

“It also means Chinese retaliation could be reinstated, dampening farmers’ willingness to invest to meet the very hard export targets in the deal.”

The agreement includes additional protections for intellectual property and addresses financial services and foreign exchange while including a provision for dispute resolution, which Mnuchin said will be binding for the first time.

Trump in August formally accused China of manipulating its currency to gain an advantage in trade and offset the impact of the tariffs.

The label, which had no real practical impact, was removed earlier this week.

Biden admin will have no tolerance for terrorism in S Asia, says his campaign

Zack Snyder says his ‘Justice League’ version will not have single...