Rahul Ghandy (RG) is at it again indulging in jingoistic rhetoric/vitriolic and “Guffaws”  – spreading fake narratives, obfuscating issues and denigrating ala Real politic – Modi despite lessons of the electoral backlash suffered in the past like “Chaiwala Chor Hai” against Modi and Sonia Ghandy’s “Maut ke Saud agar” barbs. It is bound to usher or beckon disaster for the Congress Party.

RG’s latest outburst or dramatic theatrics inside and outside the Lok Sabha targeting Modi includes: “The PM is a coward and has surrendered Indian Territory to China. It is 100% cowardice who cannot stand up to the Chinese. He is spitting on the sacrifice of our Army. Nobody in India should be allowed to do it.” RG has also denigrated the image of Armed Forces who reached the Agreement.

Daring the PM and the Government to allow a debate in Parliament, Rahul Ghandy has asked following questions:

Rajanath Singh’s, Defense Minister, statement provides clear answers to the five questions. One, it is “synchronized and organized disengagement” in line with the consensus reached between Corps Commanders – status quo ante May 2020.

Two, both armies have  agreed to convene the next meeting of their senior commanders, within 48 hours after completing the disengagement in the Pangong Lake area, to “address and resolve all other remaining issues.

Three, any structures built by both sides since April 2020 in north and south bank areas will be removed and landforms restored.

Four, the issue of Depsang Plains or Bulge area as well as other trouble-spots like Gogra-Hot springs and Charding Ninglung Nallah (CNN) track junction in the Demchok sector are likely to come up in the next meeting with China.”

Finally, the issue of PM not making the statement and the debate in the Parliament follow “Rules of Conduct of Parliament”; but at the diktat of “Dynast”.

No wonder, the BJP spokespersons have gone overboard with equally stinging replies. They have accused the Congress leader of “lying left, right and centre” and denigrating the country’s security forces, and said the “nation cannot forgive the Gandhi family for losing 43,000 sq kms of land to China”. 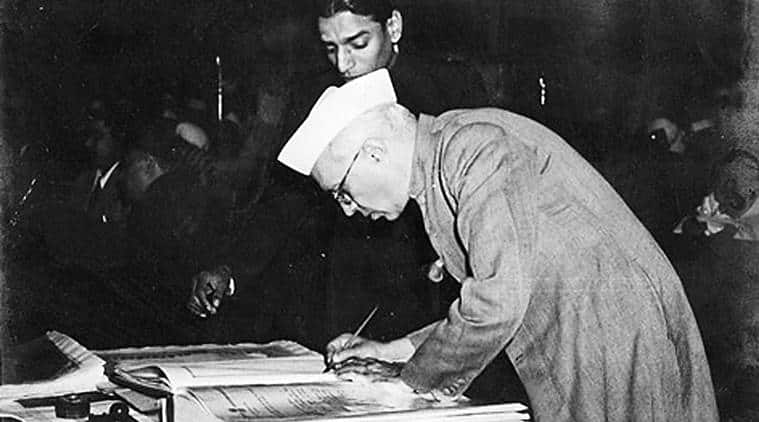 Advisors must bring to RGs notice the “GREAT BLUNDERS of BETRAYAL” of India’s interests by Nehru, his Great Grandfather, Indira Ghandy, Grand Mother, Sonia Ghandy and himself to include:

1) Stopping the Indian Army’s successful offensive in J & K and going to the UN in 1948 thereby conceding POK to include Gilgit-Baltistan to Pakistan;

5) rejecting the offer John F. Kennedy to help detonate nuclear device before the 1962 war which would have deterred China in 1962, Pakistan in 1965 and could have been founding member of the Nuclear Suppliers Group; and

Ipso facto, the Congress Party, mostly the Dynasty, concluded 6 Agreements out of 8 with China to include:

1) 1975 – “Patrolling Points (PPs)”  identified by the China Study Group on the basis of LAC claim line;

3) 1993 Maintenance of Peace and Tranquility Agreement and formally accepting the concept of the LAC when P V Narasimha Rao paid a visit to Beijing (did not refer to the LAC of 1959 or 1962 but to the LAC at the time when the agreement was signed);

5) 2012 Agreement – process for consultation and cooperation; and  6) 2013 ‘Border Defense Cooperation Agreement’ following the Depsang intrusion by the PLA. Resolved to withdrew troops in exchange for a Chinese agreement to destroy some military structures over 250 km to the south near Chumar that the Indians perceived as threatening.

Only 2 Agreements were signed by others to include: 1996 Confidence Building Measures Agreement (Deve Gowda) signed – “LAC” gained legal recognition besides limiting deployment of major categories of armaments including tanks, infantry combat vehicles, guns with 75mm or bigger caliber, mortars with 120-mm or above, various missiles and limiting combat aircraft from flying within 10 kms; and denouncing use of force or engaging in hostile activities among others; and 1999 – shifting of focus to the clarification of the LAC (Vajpayee).

It may be noted that the 2013 Agreement was signed in Beijing’s Great Hall of the People between Manmohan Singh and Li Keqiang that specified that neither side shall use or threaten to use force against the other by any means. Pending an ultimate solution to the boundary question between the two countries, the two sides shall strictly respect and observe the LAC between the two sides. Each side will keep its military forces in the areas along the LAC to a minimum level. No crossing of the LAC. If personnel of one side cross the LAC, upon being cautioned by the other side, they shall immediately pull back.

Not to be left out is the Memorandum of Understanding (MOU) personally signed by RG on behalf of the Congress Party with the Communist Party of China (CCP) in 2008, which was not shared with the opposition parties or media for people to know about it.

Let me briefly clarify the ambiguity or different perceptions persisting and unresolved over the LAC.  Blame rests on Nehru and his successors all the way down to 2013. Consequently, the LAC remains just a concept – not agreed upon by the two countries, neither delineated on a map nor demarcated on the ground. No surveyed maps in existence in 1947. 23 disputed areas pending resolution.

Few key historic milestones as a backdrop include: 1) In 1834, Raja Gulab Singh (Dogra) armies under the suzerainty of the Sikh Empire conquered Ladakh; 2) In 1842, following unsuccessful campaign into Tibet, Gulab Singh and the Tibetans signed a treaty in 1842 agreeing to stick to the “old, established frontiers”, which were left unspecified; 3) In 1846, following the victory of the British over the Sikhs, J & K region including Ladakh was transferred and Gulab Singh was installed as the Maharajah under the British suzerainty; and  4) the Maharaja regarded Shahidulla as his northern outpost, in effect treating the Kunlun mountains as the boundary of his domains.

Also, the British defined the border under two lines: the Johnson Line of 1865 (Akshai Chin in Indian Territory); and the McCartney–MacDonald Line of 1899 (Akshai Chin ceded to China).  Today, the Chinese claim the LAC including the Akshai Chin.  In contrast, the Indian claim the Johnson Line that includes the Akshai Chin. Later, the British boundary commissioners fixed the southern end of the boundary at Pangong Lake, but regarded the area north of it till the Karakoram Pass as terra incognita.

By the end of World War I, the British officially used the Johnson Line. However, they took no steps to establish outposts or assert control on the ground. From 1917 to 1933, the “Postal Atlas of China”, published by the Government of China in Peking had shown the boundary in Aksai Chin as per the Johnson line, which runs along the Kunlun Mountains. In 1925, the “Peking University Atlas”, also put the Aksai Chin in India.

Thus, upon independence in 1947, Aksai Chin in Ladakh province of the princely state of Jammu and Kashmir was not part of British India, although it was a part of the British Empire. No physical demarcation of border. What followed thereafter were two White Papers on Indian states published by Vallabhbhai Patel’s Ministry. The first, in July 1948, had two maps: one had no boundary shown in the western sector, only a partial color wash; the second one extended the color wash in yellow to the entire state of J&K, but mentioned “boundary undefined”. The second White Paper was published in February 1950 after India became a Republic, where the map again had boundaries which were undefined.

On 1 July 1954, Nehru intuitively stated the Indian position, claiming that Aksai Chin had been part of the Indian Ladakh region for centuries, and that the border (as defined by the Johnson Line) was non-negotiable. Nehru issued a directive that “all our old maps dealing with this frontier should be carefully examined and, where necessary, withdrawn. New maps should be printed showing our Northern and North Eastern frontier without any reference to any ‘line’. This map, as is officially used till date, formed the basis of dealings with China, eventually leading to the 1962 War. In 1956–57, China constructed a road through Aksai Chin, connecting Xinjiang and Tibet, which ran south of the Johnson Line in many places. The road came on Chinese maps published in 1958. India found out after the road was completed, protested against these moves and decided to look for a diplomatic solution. If any, it was “WORST Intelligence Failure”.  Surely, the road in mountains would not have been constructed overnight – must have taken at least 2-4 years!

In 1956 followed by 1959, the mention of the LAC as a line was traced to the letter written by Zhou En Lai to Nehru. Zhou En Lai argued that Akshai Chin was already under Chinese jurisdiction and that the McCartney-MacDonald Line was the line China could accept.  In his letter, Zhou had stated that “the LAC (disconnected series of points on a map that could be joined up in many ways) consisted of “the so-called McMahon Line in the east and the line up to which each side exercises actual control in the west described only in general terms on maps not to scale.”

What followed in 1960 can be termed as “LOST OPPORTUNITY”. Nehru adamantly refused to consider the unofficial offer made by Zhou Enlai – Nehru’s famous Hindi-Chini Bhai Bhai – for India to drop its claims to Aksai Chin in return for a Chinese withdrawal of claims over NEFA.  Nehru declined to conduct any negotiations on the boundary until Chinese troops withdrew from Aksai Chin. This adamant stance was perceived in China as Indian opposition to Chinese rule in Tibet.

Viewed from the historic framework, the Congress Party squandered “Golden Opportunities” dating back to 1947-1948 and surrendering to China on political and diplomatic front.

Whatever claims India could lay to territories were squandered when Nehru stopped the Indian Army’s offensive in J & K as a consequence of which India lost its claims to Gilgit-Baltistan and Shaksgam region given on lease by Pakistan to China. And, Nehru failed to seize the opportunity of unofficial offer of Zhou Enlai that India drops its claims to Aksai Chin in return for a Chinese withdrawal of claims over NEFA.

Let me also highlight that “Disengagement” is just the first part.  More important, is the “De-induction” of forces from opposite the Ladakh Theater. None must rule out the probability of China’s retraction – “Strategic Retreat”- for a variety of geo political and military reasons.

Finally, it is the physical demarcation of the Indo-Tibet border (Eastern, Central and Eastern Theaters) and ratified by both countries.

So, RG must stop personal vitriolic tirade against Modi based on false and fake narratives to obfuscate realities. Even laymen today are not ill informed and gullible to fall in line with the Congress Party scion – “Pied Piper”.

In sum, Rajanath Singh in his statement clarified “implementation of the pact will “substantially restore” the situation to the one which existed prior to the standoff that erupted on May 5 last, added the two sides have agreed they should achieve complete disengagement at the “earliest” and abide fully by the bilateral agreements and protocols.

Ipso facto, neither the Johnson Line nor the McCartney–MacDonald Line was ever ratified by formal treaties in the past or lines demarcated on the ground.

Viewed from historic perspective, therefore, the ultimate resolution of the border dispute in Ladakh can only be resolved at political level; but not at military level. And, the only feasibility for solution is to renegotiate the offer made by Zhou En Lai in 1960 to settle the border dispute on quid pro quo basis.

Are Elders a ‘Burden’ on Others? – For Youth:On Old Age- Part IV

Covid-19 Realities; States need to be blamed, not Centre

Human Relations Important for the Elders; For Youth & Old Age-Part-III