(Continued from……..The emergency of 1975, however, delayed escalation of the Akali confrontation, which was followed by the resounding victory of the Akali Dal-Janata Party coalition. In power, the Akalis remained subdued on Anandapur Sahib Resolution.

The Anandapur Sahib Resolution was passed in August 1973, which postulated the theory of Sikh homeland and the pre-eminence of the Khalsa. It was drafted by a group of eminent Sikh intellectuals. Its fallout was simple. Whenever the Akali Dal could not form a government, it extrapolated the Sikh homeland issue and invoked the Hindu Bogey.

Basically, there are two religious demands, that is, legislation of All India Gurudwaras Act and free access to all Sikh shrines including Nankana Sahib in Pakistan. The political issues are restructuring of the Constitution on real federal principles and restoration of Panjabi-speaking areas to Punjab. Predictably, the Sikh recruitment and arms issues wore also raised.

Next, the collision period extended during 1978-85. The rise and fall of the Bhindranwale phenomenon occurred during this period. It was followed by power struggles within the Akali Dal. Those enjoying power stressed for moderation, although they endorsed the Anandapur Sahib resolution. Even a section of the moderates attempted to transform the Akali Dal into a genuine regional party with a view to reduce the importance of religious leadership.

On 13 April 1978, the hardliners organised the first pressure group called the Dal Khalsa with the avowed aim demanding the creation of an independent sovereign Sikh state. The Dal Khalsa challenged the Akali Dal in the SGPC elections with the backing of Bhindranwale. Yet, it lost the elections. It advocated the use of violence to achieve its objectives. The extremist strategy was therefore, aimed at driving out the Hindus, thereby forcing the Sikh influx to ensure a large majority and aimed at removing the political anomaly.

Alongside, the Babbar Khalsa, a political offshoot of Akhand Kirtani Jatha, was established in .1978 in India. This group looked upon the Jewish struggle for the creation of Israel as a model for organising its activities. It considered Pakistan as its natural and cultural neighbour and stressed that members of the Sikh community abroad would have an important role to play in the liberation of Khalistan. The Dal Khalsa established a branch in UK on 4 January 1983 in West Germany in June 1983; in Canada in 1981. In May 1983, the group held a joint meeting with the Babbar Khalsa, Vancouver, in London and raised the banner of revolt. In sum, the crisis became international.

The Dal Khalsa was responsible for hijacking an Indian airline aircraft to Lahore on 29 September 1981 and the acts of sacrileges in Amritsar on 26 April 1982. However, both groups claim responsibility for the killing of Lala Jagat Narain and D.I.G. Atwal. The police crackdown on the Dal Khalsa in the aftermath of the Indian Airlines hijacking incident resulted in its members seeking refuge in the Golden Temple. 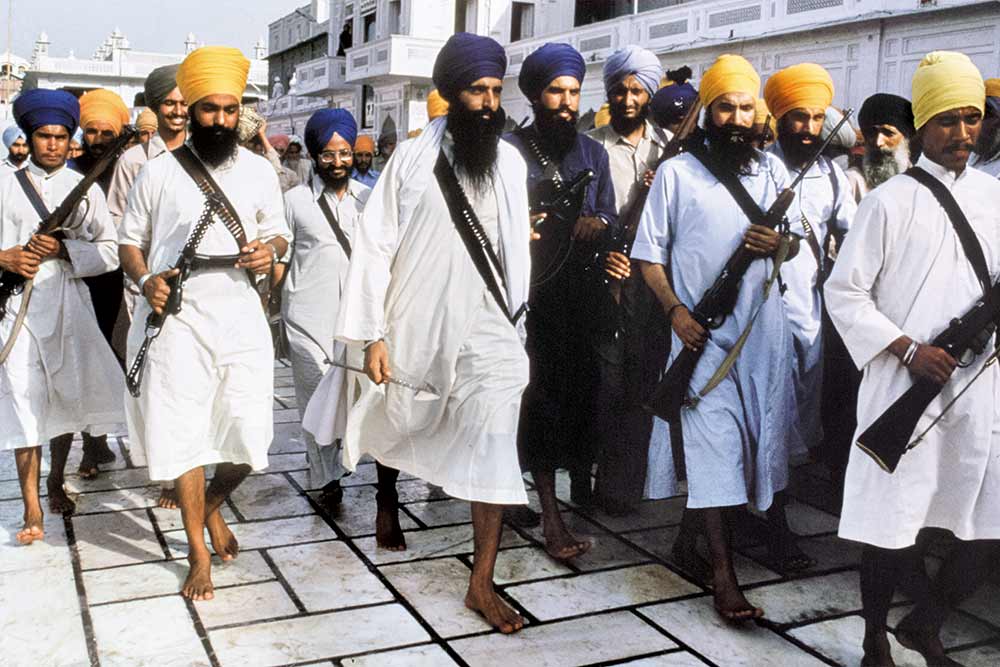 Bhindranwale Phenomenon: Religious fundamentalism and terrorism were twin tenets of Bhindranwale phenomenon. It is crucial to understand its evolution and growth. The cult of religious fundamentalism is a part of history. It is not a Bhindranwale creation. He adopted the process of intimidation and terrorisation of the Hindus to achieve well-defined politico-religious objectives of driving them out of Punjab and ensuring the return of the Sikhs living outside Punjab. It presents an interesting similarity with the creation of the Jewish state in Palestine.

Furthermore, he exploited contemporary political developments to promote politico-religious interests of the Sikhs, whereas, political parties attempted to exploit his emergence to further vested interests instead of overall national interests. In the ultimate analysis, his legacy succeeded in creating a near permanent wedge in Hindu-Sikh relations and demonstrated the potency of extremist terrorism as an internal security threat. In the end, he gained religious martyrdom, which will remain a part of the Golden Temple ethos.

Bhindranwale rise, of course, is controversial. In August 1977, he became the head of Damdama Taksal, the prime Sikh monastery. At the outset, he pronounced his commitment to Khalistan and violent means. Yet, Zail Singh, former president of India, and the Congress (I) sponsored the emergence of both Bhindranwale and Dal Khalsa with a view to countervail the Akali Dal’s clout. Mark Tully and Satish Jacob have produced adequate circumstantial evidence to prove that “the man who had been the Chief Minister of Punjab and was to go on to become the Home Minister in the Central Cabinet and then President of India, continued to promote its cause.”

It is an established fact that Zail Singh as home minister allowed Bhindranwale to actively support the Congress (I) candidates in selected constituencies during the 1980 elections. He ordered the release of Bhindranwale after he was arrested on Darbara Singh’s orders in October 1981. More important, he allowed Bhindranwale triumphant visit to Delhi with his supporters brandishing weapons and spreading Sikh-Hindu hatred in April 1982.

Meanwhile, Bhindranwale cult of extremist violence took a significant toll of its opponents, irrespective of religion. He attempted to engineer a clash with the Nirankaris on 13 April 1978 on Baisakhi day, which resulted in the death of 13 Sikhs due to police firing. In retaliation, Baba Gurucharan Singh, head of the Nirankari Mission in Delhi was killed on 24 April 1980. In September 1980, the Indian Airlines plane was hijacked to Lahore. Lala Jagat Narain, editor of Hind Samachar and an Arya Samaj activist was killed on 9 September 1981.

If the Congress (I) attempted appeasement between 1978 and 1982, whilst out of power in Punjab, to serve its vested interests, even the Akali Dal joined the bandwagon of riding the tiger to protect and consolidate its hold on Sikh affairs and thwart Congress (I) designs. As a result, political rivalry for pre-eminence unwittingly promoted dangerous extremist- cum-terrorist religious fundamentalism, which ultimately paved the way for a dismal politico-religious outcome.

Meanwhile, desecration of Hindu religious places was launched to provoke Hindu backlash elsewhere. As Bhindranwale campaign of violence escalated, even the Akali Dal decided to match it with its own brand of militancy— declared a holy war against the government and masterminded the Jail Barao agitation. Later, they stormed the parliament and followed it up with a succession of agitations: Nahar Roko (canals blockade), Rail Roko (railway blockade), and Rasta Roko (road blockade) and Kam Roko (work stoppage). Even a ‘Morcha’ was launched to demand the release of Amrik Singh, Bhindranwale’s right-hand man, and the President of the AISSF in July 1982.

By mid-1982, the Bhindranwale phenomenon became transparent. He too chose to conduct his fight for Khalistan from the Golden Temple. In all this high drama, the Akalis became silent bystanders. They were a divided house: P.S. Badal advocated moderation; Tohra advocated support to the extremists; and, Longowal steered the mid-course. All of them dithered, but agreed that the party would be isolated, if they failed to do something. So, they too joined the talk of Holy War to realise the demands listed in Anandapur Sahib Resolution. In 1983 President’s Rule was imposed. A number of peace initiatives and negotiations were attempted, but failed due to lack of political will out of fear losing the Hindu vote banks. Meanwhile, Bhindranwale wrested the initiative and control inside the Golden Temple after a bitter struggle with Longowal and the high priests, and entrenched himself for the final showdown. The last minute negotiations between Tohra and Bhindranwale failed with the emergence of Hindu Suraksha Samiti. At this stage, Longowal issued the call for a bandh to prevent the transfer of food grains. It forced the government to issue orders to the army to conduct operations inside the Golden Temple.

The army conducted Operation Blue star between 4 and 7 June 1984. Longowal, Tohra and Harminder Singh Sandhu of AISSF along with 400 others surrendered. Bhindranwale was killed. The Sikhs all over the world mourned. The Hindu reaction was one of relief. Yet, violence did not recede.

On 9 June 1984, Jagjit Singh Chauhan called upon patriotic Sikhs to rise up and assassinate Indira Gandhi, her son Rajiv and the senior military officers who conducted the operation. He organised Sikh terrorist groups under the aegis of the World Sikh Organisation founded in New York in July 1984, as a response to the desecration of the Golden Temple, based on Sikhs residing in five foreign nations: USA, Canada, Great Britain, Norway and Holland. Others to attend the convention were: Kashmir Liberation Front, Tamil separatist organisations and Afghan Mujahedeen. (To be concluded)

20 men from Telangana cheated with promised jobs in Singapore