The raging controversy over the floating dead bodies in River Ganges and lying on its banks in the major states of Uttar Pradesh and Bihar has added more fuel to already “Burning India” ravaged by the second wave of Covid-19 pandemic.

Irresponsible opposition and equally ‘heartless’ media, especially partisan electronic media, conjointly are providing exhaustive coverage – scaremongering – not only in regularly hourly bulletins but also during the prime time debates accusing the government’s failure to protect the dignity of the dead thereby denigrating ruling regime image not only domestically but also internationally irreparably.

Is it not a fact that media has highlighted the risks of transmission involved in their departed near and dear ones created by spreading negative narrative with the few medical experts views?  Of course, media conveniently forgot to recall mass cremations and burials carried out by the state governments during the first wave.

For example, the death of Dr Simon Hercules, a neurosurgeon in Chennai, made media headlines. A man who had spent his lifetime treating patients was denied dignity in death, after residents near a cemetery in Chennai assaulted his family, friends and health officials when his body was being buried. Similar incidents have been reported from other parts of the country, most recently in Andhra Pradesh’s Chittoor district. Residents of Ragampeta village laid a thorny fence to protest the proposal to set up a burial ground for COVID-19 victims. Those protesting feared that burying the body of a person who died of COVID-19 could spread the viral infection.   In Hyderabad, the reopening of an electric crematorium for the cremation of COVID-19 victims sparked protest among residents in the colony. Residents feared that smoke from the crematorium could pose a threat to their health.

In all of these cases, fear, ignorance and stigma attached to COVID-19 are the main triggers for such protests — that have sometimes taken a violent turn.

Is there any truth to such fears? Why media has failed to provide a informed perspective on how to ensure safe burials/cremations for COVID-19 victims and to give a dignified funeral?

“The greatest risk is from the living and not the dead,” said Oran Finegan, head of forensics for the International Committee of the Red Cross (ICRC).  Experts have carried out exhaustive studies. Their findings include:

Speaking to TNM, Dr Shahid Jameel, a virologist and the Chief Executive Officer of the Wellcome Trust-DBT India Alliance, rubbishes fears over the corona virus spreading due to smoke from crematoriums. He pointed “there are studies to show that the virus is destroyed in 70 degrees in one minute. When you are burning a body that decimates the body immediately.”

However, Dr Shahid  explains that a dead body can be infectious as the body still has fluids, which can transmit the SARS-CoV-2 virus that causes COVID-19. 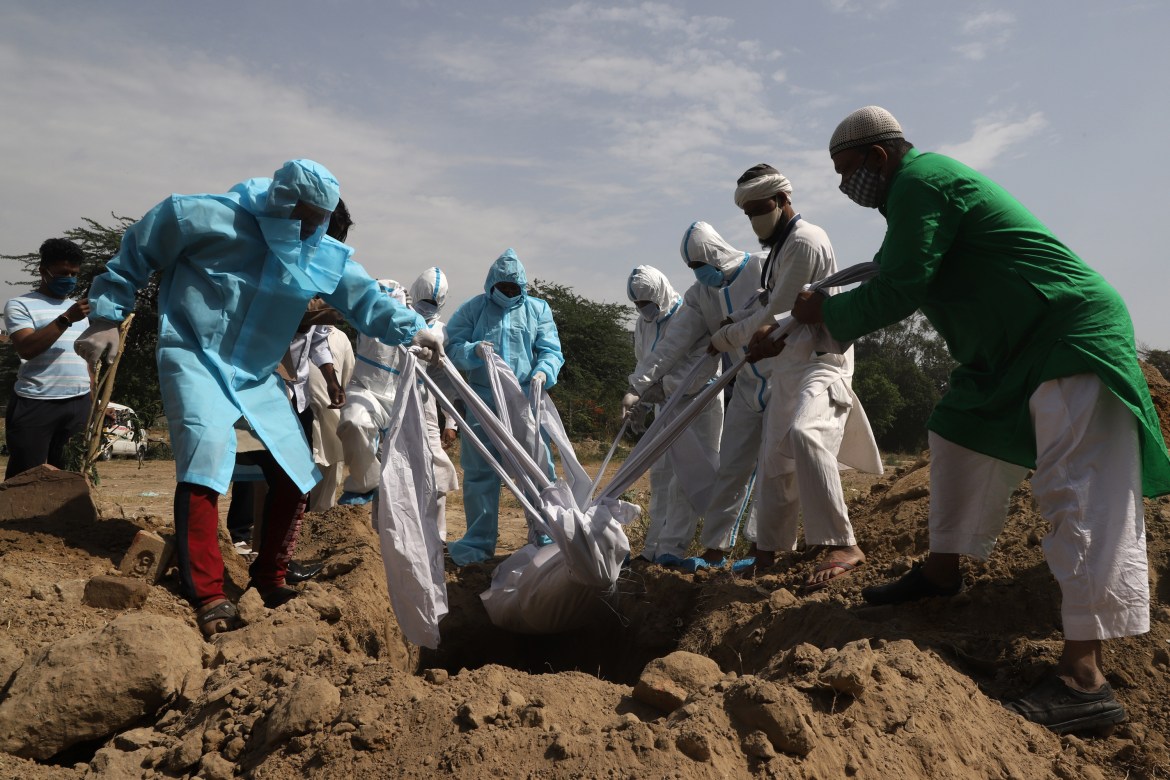 Most important, the Union Ministry of Health and Family Welfare (MoHFW) and the World Health Organization (WHO) have come up with protocols on the safe disposal of a body of a suspected or confirmed case of COVID-19.

In its March 24 guidance, the WHO states that except in cases of hemorrhagic fevers (such as Ebola, Marburg) and cholera, dead bodies are generally not infectious. “Only the lungs of patients with pandemic influenza, if handled improperly during an autopsy, can be infectious. Otherwise, cadavers do not transmit disease,” states the WHO, adding, “It is a common myth that persons who have died of a communicable disease should be cremated, but this is not true.”

Both the MoHFW and the WHO emphasize that health workers handling bodies of COVID-19 victims must wear Personal Protective Equipment (PPE). At the time of preparing the body for transfer from the hospital, MoHFW guidelines state that all lines, catheters and tubes need to be removed and any puncture holes or injuries to the body should be disinfected with 1% hypochlorite and dressed with impermeable material. Furthermore, to ensure that bodily fluids do not leak, oral and nasal orifices of the dead body need to be plugged.

The dead body must be placed in a leak-proof plastic body bag, states MoHFW, adding, “The exterior of the body bag can be decontaminated with 1% hypochlorite. The body bag can be wrapped with a mortuary sheet or sheet provided by the family members.”

The MoHFW details specific safety precautions for the staff at crematoriums and burial grounds including wearing PPE, and hand hygiene. The guidelines also make clear that following cremation, the ashes do not pose any risk and can be collected to perform the last rites.

Experts have also pointed out that corona virus transmission cannot happen through water after bodies of suspected Covid-19 patients were fished out of the Ganga and Yamuna in Bihar this week. However, Satish Tare, professor at IIT-Kanpur, said dumping of dead bodies in the Ganga or its tributaries or sub-tributaries is a serious matter, particularly at a time when the country is grappling with the COVID-19 crisis. 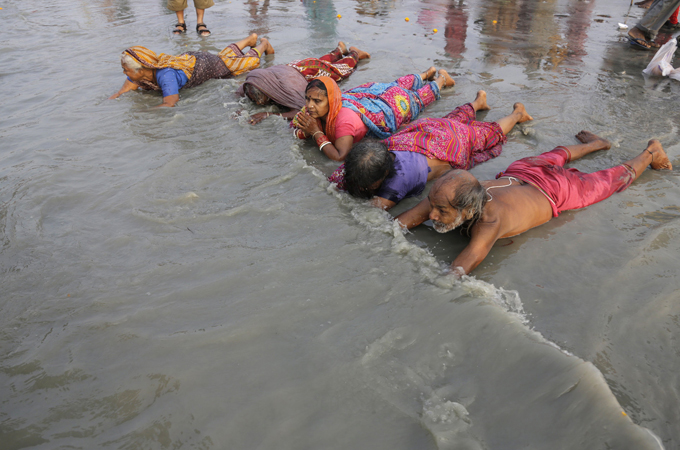 Since it is the responsibility at the Hospitals end to ensure that the protocols prescribed by the WHO and MoHFW be strictly implemented at functional/grass roots levels, the responsibility for failure to ensure effective implementation falls not only on the State Government’s but also civil society members instead of indulging in rubbish cacophony.

Ipso facto, Modi led NDA is the facing multiple challenges to his regime survival due to the fallout of second wave of Covid-19. All alike from the opposition political parties and the media are denouncing Modi for gross mismanagement of health sector and holding him responsible 24×365 basis for all shortcomings even at directional, functional and grass roots levels with blistering denunciation by spinning speculative rumors.

In particular, all opposition political parties, leaders and spokespersons are seizing and exploiting every single opportunity to sow seeds of doubt about Modi’s failure to forecast the likely onset of second wave of Covid-19 and his inept and incompetent handling to proactively prepare medical and health infrastructure to manage and counter the spread of the Pandemic. No holds barred invectives at Modi with utter disregard to the chair of the Prime Minister.

The anti-Modi theme is simple – Gross incompetence and contempt for public good.

None either in the opposition political camps or the partisan media are highlighting the irrefutable fact that as per the Constitution, “Health” is State Government subject. If so, the State Governments are responsible and accountable for all inadequacies in the medical infrastructures in the hospitals and their inept and inefficient management.

Such is the phenomenal intellectual bankruptcy that they obfuscate directional, functional and grass root levels failures and attribute them to Modi. But, they give and take credit for “Ham Jitha Hai 2 war on Corona; aur ham milke jithenge second wave corona” to fool gullible people or fools.

All alike must admit that the catastrophe, while exceptionally severe, is the cumulative result of total negligence of Health Sector over the past 74-years by successive State Governments; and also their gross negligence to prepare and upgrade to counter the onset of the second wave to include mandatory commissioning of Oxygen Plants not only at all State Government Hospitals but also at all corporate and private hospitals.

As per Fact Check in public domain, “out of 162 PSA plants sanctioned by Govt of India from PM-Cares Fund, 33 have already been installed – 5 in MP,  4 in Himachal Pradesh, 3 each in Chandigarh, Gujarat & Uttarakhand, 2 each in Bihar, Karnataka & TL; and 1 each in AP, CG, Delhi, Haryana, Kerala, Maharashtra, Puducherry, Punjab & UP.”

Why the State Governments, on their own, failed to commission “Oxygen Plants” integral to the State run hospitals; and make them mandatory as adjunct for all the Corporate and Private Hospitals having more than 25 ICU beds? What prevented the State governments to produce “Oxygen Concentrators” indigenously in joint collaboration with Start-Ups or other Corporate?

Delhi and Mumbai has well over 40 to 50 top class Corporate Hospitals. Even now, the State governments must give specific time period for them to commission integral Oxygen Plant facility instead of backtracking. Even all State governments must enact such provisions. After all, all major hospitals make enough profits to add-on infrastructure essential to meet their requirements.

Criticism, per se, must be ensured in a functioning democracy; but not spreading and compounding “functional anarchy”. With increasing number of self-styled anarchists lurking around in all corners of the nation and raising crescendo of destructive criticism, the path to destabilize and disintegrate the nation is on course.

Creative criticism – positive -is what is needed to overcome the challenges; but not “destructive criticism bent upon creating anarchy and chaos. Earlier know-all intellectual houses realizes it, the better it is to overcome

Partisan media editors, behind the scenes, are adding fuel to opposition party’s hateful rhetoric and vitriolic by innuendos to somehow derail Modi-led NDA juggernaut as early as possible so that they can get back to their lavish bonhomie with the political leaders particularly sojourns to foreign lands accompanying the Prime Minister and enjoying free perks and privileges.

Media’s sly witch hunting and blame-shifting sensationalism, based on their self styled know-all status on every single issue, is clearly obvious.   All created and overseen by opposition political class rejected at the polls in 2019 due to contempt for the public good, corruption and incompetence.

In sum, it is high time that “Political and Media” opportunism, more aptly skullduggery, must stop. In all of these cases, fear, ignorance and stigma attached to COVID-19 are the main triggers for such protests — that have sometimes taken a violent turn.

Instead, creative suggestions be identified, formulated and implemented to ensure “dignified cremation/burial to the departed near and dear ones as per laid down rituals.

Some of the few Covid-19 Warriors who are picking up abandoned bodies in the rivers and cremating/burying them are worthy of appreciation in the media and replication. Their creative suggestions be identified, formulated and implemented to ensure “dignified cremation/burial to the departed near and dear ones as per laid down rituals.

Not leaving RCB till the time I am playing IPL: Kohli