Modi, who arrived here today on a two-day state visit to Nepal, directly went to the Janaki temple, dedicated to the Hindu goddess Sita, from the airport.

Nepalese Prime Minister KP Sharma Oli welcomed his Indian counterpart upon his arival at the temple complex. Modi will spend around 45 minutes in the temple.

Devotional bhajans of Sita and Ram was played during the 10-minute long prayer perperformed by Modi at the temple.

Shodashopachara worship ceremony with sixteen ritualistic services including tantric mantra recitation is carried out only by special guests at the Janaki temple. During the ritual, the idol of Hindu Goddess Sita is worshipped and decorated with clothes and jewels.

Modi is the first Indian Prime Minister to hold such a worship ceremony at the temple. 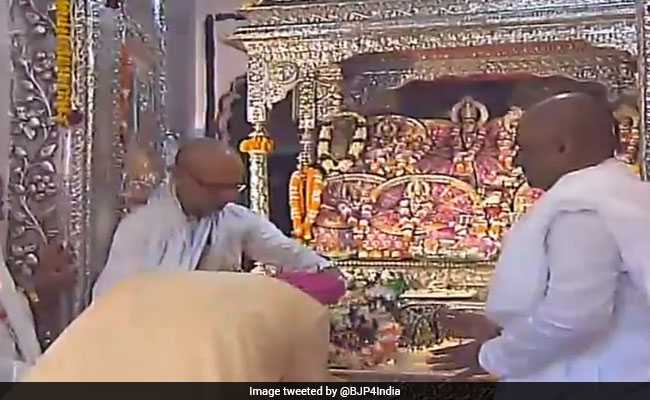 Thousands of people have gathered in the Janaki temple premises to welcome Modi. Janaki temple has got a new look as the temple was cleaned up and decorated with lights.

Janakpur is known as the birth place of Sita, the wife of Lord Rama. Janaki temple was built in memory of Sita in 1910. The three-storied structure made entirely of stone and marble is 50-metre high and spread over 4860 sq feet.

Later, Prime Minister Modi will be accorded a civic reception by the Janakpur Sub-Metropolitan City at Barhabigha ground. Modi and Oli will jointly launch Ramayan Circuit to promote tourism in Nepal and India.

This is the third visit of Prime Minister Modi to Nepal and the first high-level visit from India since the formation of the new Government in Nepal this year.

Ahead of his visit, Modi said India would remain a steadfast partner of the Himalayan nation in its quest for growth and development.

Describing his trip to Nepal as a reflection of his government’s commitment to “neighbourhood first” policy, Modi had said the Himalayan nation has entered a new era and India would continue to support it.

Biden admin will have no tolerance for terrorism in S Asia, says his campaign