Modi’s political leadership and statesmanship is increasingly coming under strident criticism by Opposition leaders. All of them are questioning Modi’s shying away from speaking in the Parliament on key national security issues: Kashmir crisis and Dalit atrocities.

When the Parliament is in session, his political rivals demand to react and respond inside the “Temple of Democracy” instead of public meetings or “Town Hall’ or Man ki Bat monthly addresses appears quite justified in democracy.

It is high time for Modi to shed his “Maun Vrat” in the parliament like his predecessor. As a strong and great leader and statesman, he must become proactive instead of being drubbed as a ‘reactive’ leader.

Modi’s stoic silence in the Parliament on key national security issues like the Kashmir conflict or Dalit atrocities surely does not lend credibility to his stature as a strong and dynamic leader and statesman.

Justifying freedom allowed to the senior ministers to respond to key issues as the reason for Modi’s ‘muted’ posture does not cut ice with majority.

Everyone is aware of the extraordinarily complex and crisis ridden internally and external environment of India. No place for “weak-kneed” leadership. Never too late for Modi to replicate Winston Churchill’s astute leadership and statesmanship qualities.

Of course, the Congress Party has no moral right to criticize Modi for his current stoic posture inside the Parliament having set such a political leadership precedent during their 10 year rule.

People opted for strong and dynamic leadership; but not sulking or puppet leadership. So, it is an imperative for Modi to satisfy people’s expectations. Yes, he must stand and talk in Parliament. He must rise to the occasion. 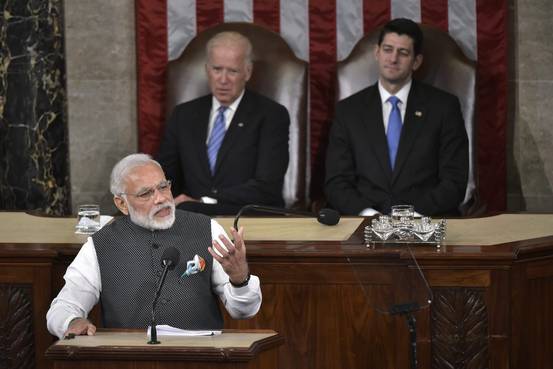 Modi is undeniably an experienced and skilled politician. As a “chaiwala’ turned ‘Karyakartha of the RSS, Modi understands the concept of “Bharatiyatha and Akhandata” better than majority of leaders brought up in modern Delhi full of treachery and intrigue – inherited heritage.

Modi has ideas, conviction and experience, besides brilliant oratory. If he does not use them to advantage, he will go down in history as a ‘footnote’. Earlier Modi realizes it the better it is for him.

Now that Modi is the Prime Minister of India representing a wide cross-section of a multi- cultural and pluralist society, he must transcend the narrowly defined concept of ‘Nationalist’ philosophy of radical fringe elements of Hindutva brigade.  Transform Modi must into a true patriot of people of India. Modi must uphold the idea or sense of India.

Shed the inherited legacy of “Divide and Rule” on caste and communal lines (narrow sectarian vote bank politics lines) which is the hallmark or centerpiece of their political ideologies.

“Unite and Rule” should become Modi’s plank henceforth; not merely development. His prime focus should be on “Sab Ke Sath” for “Sab ke Vikas” will follow automatically.

With his oratory skills and body language, surely Modi can silence not only his critics in the Parliament, but also the paid pseudo intellectuals appearing in the visual media channels. 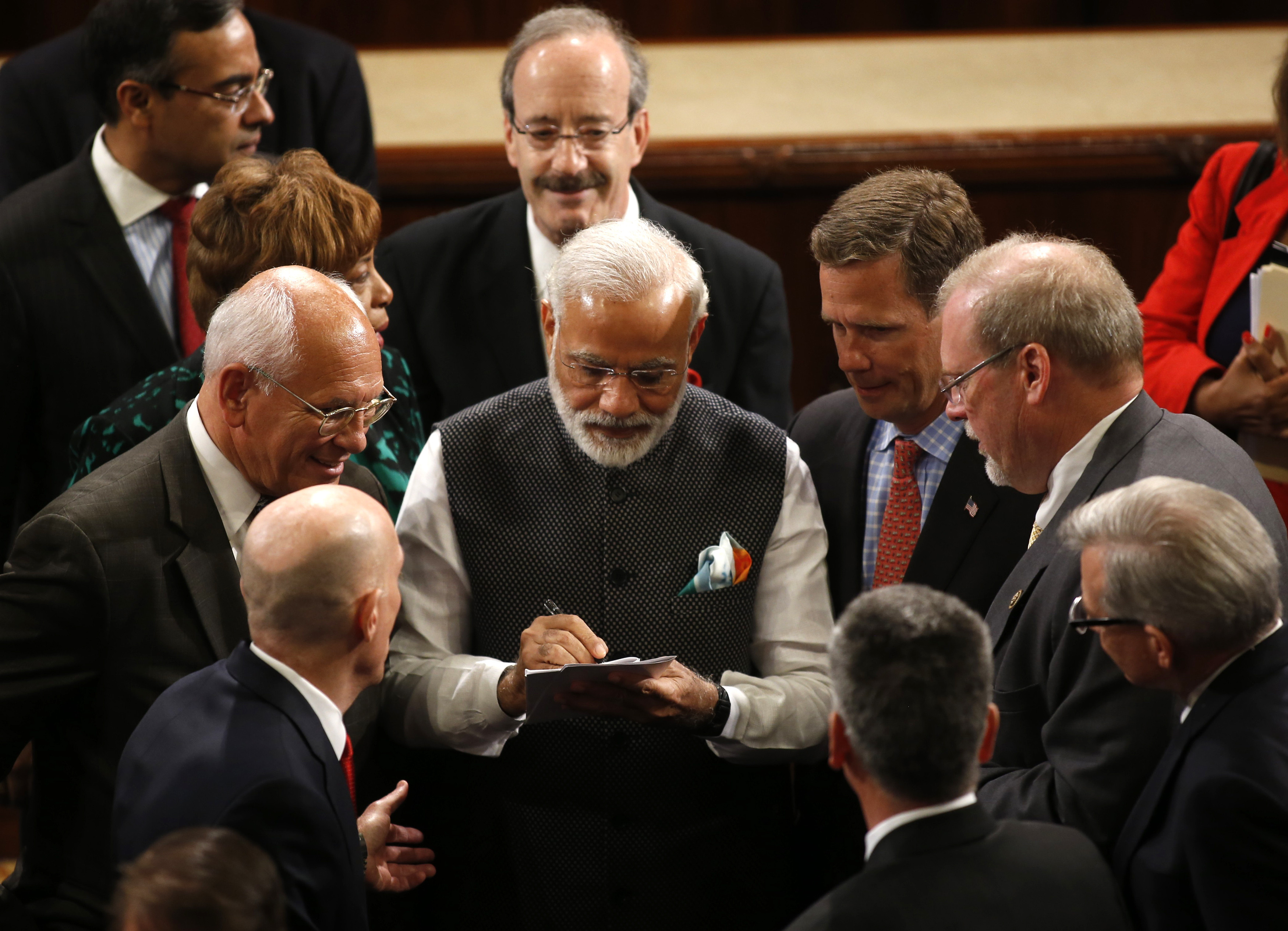 As on date, there are no real challengers to his stature among his political rivals in the Parliament. Sonia and Rahul Ghandy’s is no match before him. So also, leaders of other political parties like Mulayam Singh Yadav or Mayawati or others in the Lok Sabha.

A brief review of modern Indian leader’s performances woefully reflects surfeit of true leadership and statesmanship. None can deny that the founders of modern India were mostly agitators turned political leaders.

In fact, quite a few among them were not of perfect character. Behind their mask, they too indulged in backroom treachery and intrigue in pursuit of power that resulted in the horrendous communal partition. Yet their cronies continuously harp on their claims for leadership and statesmanship stature. For they cannot lay claims to their own leadership status and credibility.

All past leaders singularly lacked long term strategic vision and were myopic and reactive.  Otherwise, modern India after nearly 69 years of freedom from colonial slavery would not have been in a dismal state – siege from within – as it is today providing an open invitation to external adversaries to exploit. 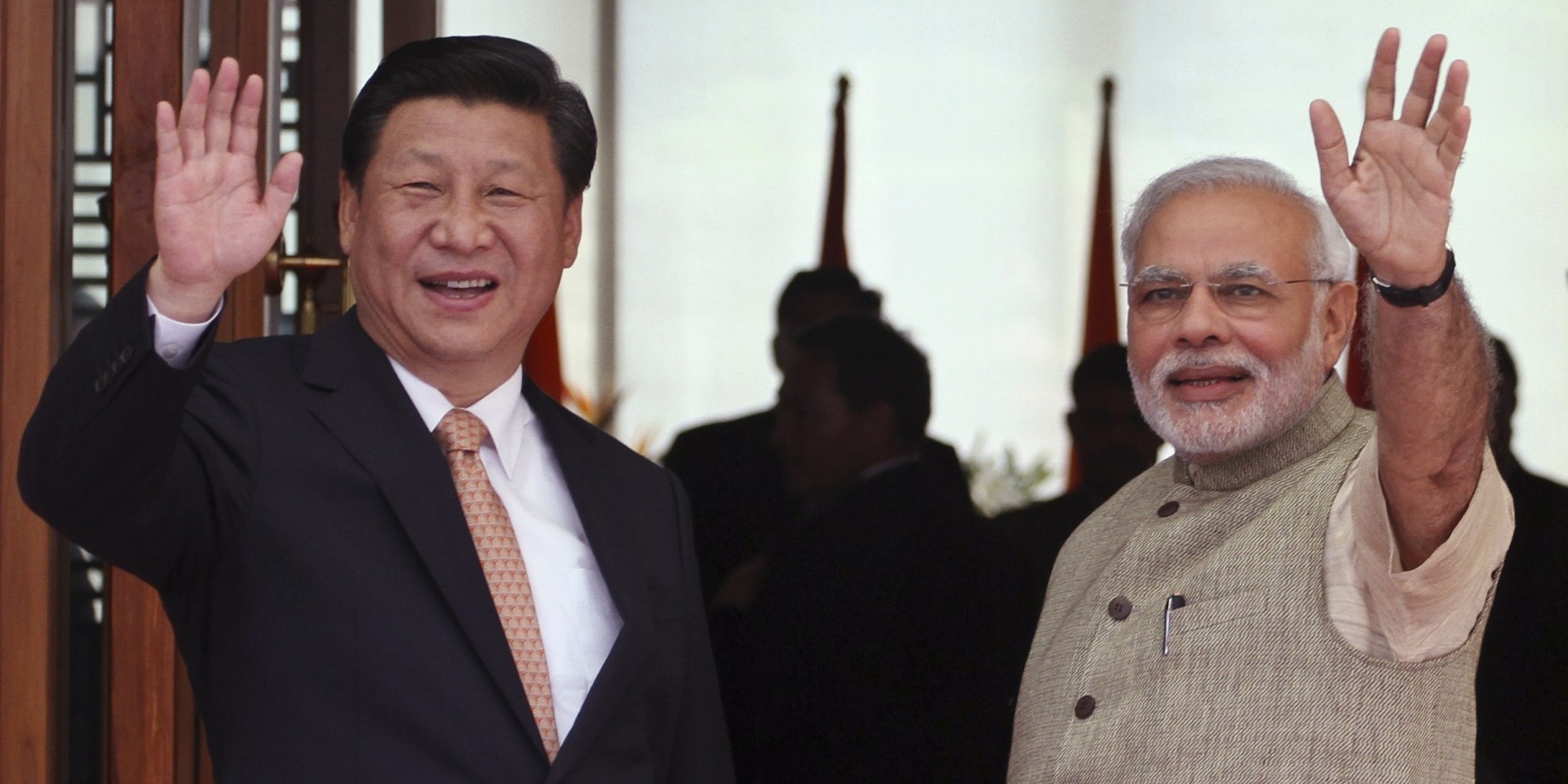 At this juncture, it is not out of place to recall the difference between a statesman and a politician.  A statesman stands by the vision, values and principles and works with ideas unflinchingly under pressure. Quite often, statesman questions the wisdom of the plans. More importantly, statesman leads to forge consensus; and doesn’t wilt under opposition criticism. Statesmen earn votes; politicians buy them. For example, Modi’s stunning victory in 2014 setting aside pollster’s predictions.

In contrast, a politician works with details and debates the cost of the plan. A politician follows the crowd. A politician tells his constituents what he proposes to do for them having consistently failed to deliver – false pre-poll promises like “Gharibi Hatao nearly 50 years ago or the so called pseudo secularism.

Over the past 67 years, sadly there is decline in the leadership qualities in our elected representatives what to talk of statesmanship statue. Majority behave like leeches gnawing away at the vital of society and its values.  People, mostly gullible, fall a prey or succumb to their crooked guiles. Ironic but true, people bitterly complain against politicians for their craving for wealth, status and power, but they continue to ensure their survival at the ballot box. Naturally, they are getting what they are opting for and deserve.

In retrospect, Modi is caught at the cross roads. He must shed his “Maun Vrat” in the Parliament as a statesman (as a free leader of a free people) to enlist those who serve with him in the government to support his initiatives and his vision for future India.  He must rein in all his “loose mouths” or cast them away into political sidelines. Remember Modi must always that his ultimate success as a great leader and statesman depends on building a consensus that ultimately hinges on his ability to convince his countrymen of the soundness of his philosophy.

Modi must abandon the use of slick advertisements and PR campaigns like “Tweets”.  “Shining India” campaign failed the BJP in the past. Modi must appreciate that ads and propaganda are the tools of the despot. They raise people’s expectations. When they fail to deliver, their backlash can be devastating.

Modi must understand that his success at the polls proved all opinion polls in 2014 wrong because his ideas and appeal generated hopes among the majority. At the same time, the Delhi and Bihar polls also highlights a key lesson for the BJP – powerful rhetoric alone cannot pay electorally. As a statesman and dynamic leader, one must keep his word and deliver what he says he will do.

Perhaps, it is not out of place to appeal to Modi with all humility to revisit the leadership and statesmanship attributes of Abraham Lincoln and Churchill hailed as “the greatest statesman of the 20th century.”  Churchill was an effective leader and statesman because of his tremendous ability to inspire people; his unique strategic insight; his relentless passion; and his imperturbable personality.  Churchill perpetually demonstrated enthusiasm, determination, and optimism at least always in public.

The effect of Churchill’s zeal was felt immediately in Whitehall.  A sense of urgency was created in the course of very few days and respectable civil servants were actually to be seen running along the corridors.  No delays were condoned; telephone switchboards quadrupled their efficiency; the Chiefs of Staff and the Joint Planning Staff were in almost constant session; regular office hours ceased to exist and weekends disappeared with them.

Churchill’s ability to inspire may be seen in the opening days of World War II.  He did not permit a defeatist attitude, nor would he entertain talk of reasonable terms with Adolf Hitler.

Perhaps, Modi may like to follow Churchill’s footsteps in not entertaining talks with either Pakistan or separatist leaders over Kashmir crisis and conflict. Similarly, he must deliver on taking action against those indulging in “Dalit atrocities” and the so called “Gau Rakshak’s or Sevaks”.

Modi can take comfort that he too has brought about the most desired change in the ‘status quoits’ Central Governments functioning.

Kudo’s certainly goes to him for maintaining a ‘clean slate’ on the corruption issue in his Cabinet until now. However, he also needs to maintain a firm hand on the BJPs regional Satraps.

Finally, Modi must also take a leaf out of Churchillian outbursts of humility.  While Churchill’s power to inspire, his strategic foresight, his driving passion, and his unstoppable personality were the core qualities that made him an effective leader and statesman, the realization that he too was a “worm” tempered his character and kept him focused. No need to present an arrogant posture.

In sum, it is never too late for Modi to undergo desired transformation in his leadership and statesmanship behavior. Otherwise, he too would perish at the next battle of ballot box in 2019 thereby enabling pseudo political leaders to take center stage contributing to the peril of modern India as never experienced before.

Saudis say they will defend themselves, as Trump warns Iran

Row over army deployment in WB echoes in Parliament

Modi rips into Congress for spreading ‘lies and rumours’ on Dalit,...