Qingdao (China): Prime Minister Narendra Modi today said he had detailed discussions with Chinese President Xi Jinping on bilateral and global issues which will add further vigour to the India-China friendship after their “milestone” informal summit in Wuhan.

An MoU on sharing hydrological information of the Brahmaputra River by China to India and another pact on amendment of the protocol on phytosanitary requirements for exporting rice from India to China to include non-Basmati rice were signed after the Modi-Xi talks here in the eastern Chinese port city.

During their meeting, which came nearly six weeks since the Wuhan summit, the two leaders discussed a blueprint for deepening bilateral relationship and reviewed the implementation of decisions they had taken in the central Chinese city.

The meeting took place ahead of the Shanghai Cooperation Organisation (SCO) summit and covered key aspects of the bilateral engagement, reflecting the resolve by the two countries to reset relations and bring back trust in their ties which was hit by the Doklam standoff and several other thorny issues. 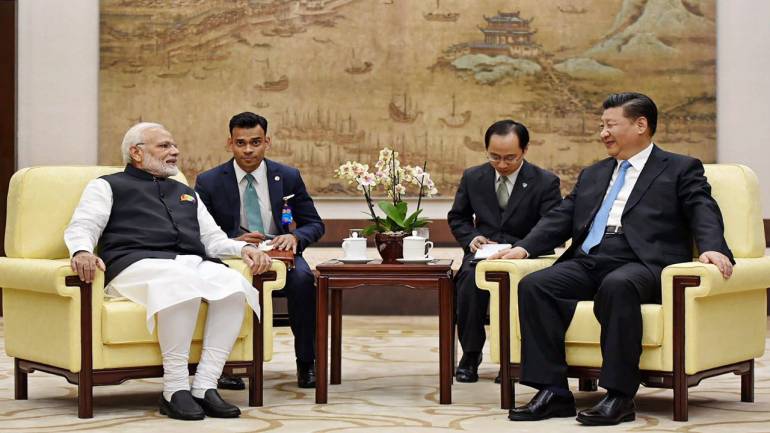 “Met this year’s SCO host, President Xi Jinping this evening. We had detailed discussions on bilateral and global issues. Our talks will add further vigour to the India-China friendship,” Modi tweeted after the meeting.

Recalling that he and Prime Minister Modi successfully had an informal meeting and reached important consensus in Wuhan, President Xi said the meeting had been well received by both countries and the international community, and a positive atmosphere is taking shape to pay close attention to and support the development of China-India relations.

China is willing to work with India to take the Wuhan meeting as a “new starting point” to continuously enhance political mutual trust and engage in mutually beneficial cooperation across the board, so as to push forward China-India relations in a better, faster and steadier manner, Xi was quoted as saying by China’s state-run Xinhua news agency.

Briefing the media on the Modi-Xi meeting, Foreign Secretary Vijay Gokhale said it was “very positive and forward looking” with both leaders lauding the spirit of the Wuhan summit.

President Xi has accepted Prime Minister Modi’s invitation for an informal summit in India in 2019, Gokhale said, adding that the dates and other formalities will be worked out later through diplomatic channels.

China’s defence minister as well as the Minister for Public Security will visit India.

The meeting between the leaders of two Asian powers came after their informal summit in the Chinese city of Wuhan to solidify the relationship in a broad spectrum of areas and ensuring better coordination between the border guarding forces of the two countries after the Doklam standoff.

After their talks in Wuhan, Modi and Xi had decided to issue “strategic guidance” to their militaries to strengthen communications to build trust and understanding as part of efforts to avoid a Doklam-like situation in the future.

The two leaders had also discussed ways to give impetus to their economic ties as well as people-to-people relations.

Luo said it was the 14th meeting between the two leaders over past four years.

Modi arrived here on a two-day visit to attend the annual SCO summit.

The ties between the two neighbouring nuclear powers had nosedived following last year’s Doklam standoff as well as due to a number of other issues issues including China blocking India’s move to get Pakistan-based Jaish-e-Mohammed chief Masood Azhar banned by the UN and its opposition to India’s bid for the Nuclear Suppliers Group membership.

China’s Belt and Road Initiative was also strongly opposed by India as part of it goes through Pakistan-occupied Kashmir.

Troops of India and China were locked in the 73-day standoff in Doklam since June 16 last year after the Indian side stopped the construction of a road by the Chinese Army in the disputed area. Bhutan and China have a dispute over Doklam. The face-off had ended on August 28.

However, there have been concerted efforts by both sides to reset ties leaving behind the Doklam episode.

Last week, Modi had said that Asia and the world will have a better future when India and China work together with trust and confidence while being sensitive to each other’s interests. Modi also said that an “Asia of rivalry” will hold the region back while an Asia of cooperation will shape the current century.

The prime minister’s comments at the Shangri-La Dialogue in Singapore were appreciated by China.

It is for the first time the Indian prime minister will be attending the SCO summit after India along with Pakistan became full-fledged members of the grouping last year.

Govt working to empower every section of society that has faced deprivation, neglect: PM