In an interesting move, those 23 senior Congressmen (G-23) who wrote a strongly-worded letter to the party’s in-charge President Sonia Gandhi to conduct polls to choose a full-time president, have assembled in Srinagar under the garb of fecilitating their senior colleague Ghulam Nabi Azad, whose terms as Rajya Sabha completed recently. The choice of the venue for G-23 is understandable as it happens to be Azad’s native place and he also served his home state as chief minister in the past.

Though, they have claimed to have gathered to launch a campaign against the Bharatiya Janata Party, yet it rurned out to be a platform for some of the speakers — all Congressmen — to air their strong views on the state of affairs within their own party.  Their concern looks genuine as the party is losing fast its relevance in Indian politics, though it claims to be the oldest which brought us Independence single handedly.  The party’s woes began from losing Madhya Pradesh, though it recaptured it after a gap of `10 years, then its dismal performance in Bihar.  To cap it all, it is losing power even in a Union Territory like Puducherry that too on the eve of election as many chose to desert the ship. What is more astonishing is that the party crumbled within days after Rahul Gandhi’s visit. What does it indicate?

And, the tone and tenor at the G-23 meet is loud and clear.  They are determined to save the party as it is leaning towards the ‘death-bed’ to make none other their arch political rival and Prime Minister Narendra Modi’s prophecy – that is, “Congress mukth Bharat” come true.   Though, they could not pick up the courage to say it’s time for the Gandhi-clan – Sonia, her son Rahul and daughter Priyanka – to exit from all party affairs, yet their message tantamount closer to that.

Party’s one of the ‘legal brains: Kapil Sibal was rather more blunt and vociferous.  Without mincing words, he said; “This is an occasion and podium to speak truth and the truth is that Congress is getting weak and therefore we have assembled here to make it strong together.” In fact, the meeting was organised under the banner of a ‘Shanti Sammelan’ or peace meeting by a body called the Gandhi Global Family (a reference to Mahatma Gandhi, not Sonia) and also attended by all G-23, was however proved otherwise. The venue and timing too appears perfect to further embarrass the Sonia-Rahul gang. The venue happens to be Azad’s native and he is also a popular figure in the Union Territory, as he served as chief minister before when it was undivided as Jammu and Kashmir. 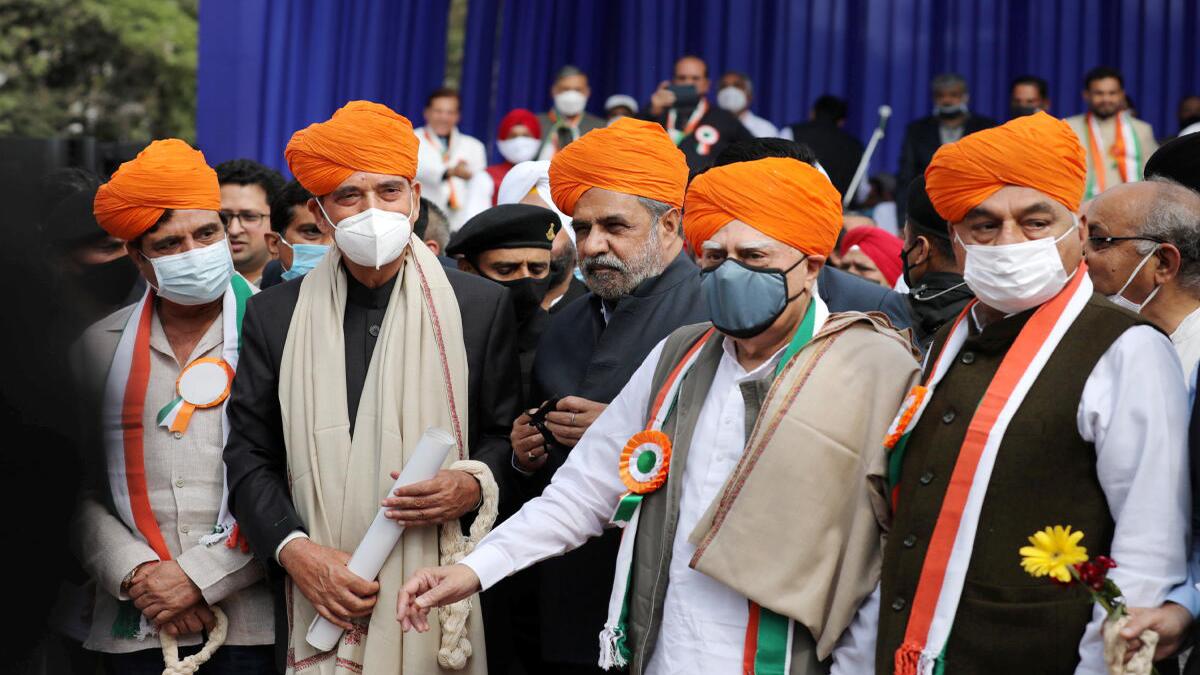 It may be worth recalling here that in last August, these very 23 leaders wrote a letter to Congress president Sonia Gandhi in which they called for “full-time and effective leadership”, elections to the Congress Working Committee (CWC), and a mechanism to guide the party’s revival. During the last meeting of the CWC last month, they decided to postpone internal elections which did not go down well with the letter writers. Subsequent, party appointments have seen younger leaders who want Rahul Gandhi back as the party president is being given precedence in organisational appointments over some of the signatories.

In his address, Sibal expressed his displeasure that the party didn’t choose to accommodate Azad in Parliament after his retirement. “Now, what is the real role of Ghulam Nabi Azad… we need an experienced pilot to fly a plane and an engineer to fix any technical snag. Azad is experienced and an engineer too. Why am I saying this, is because he knows reality of the Congress in every state and district. And, when we realised that Azad is being freed from Parliament we felt sad. We never wanted him to be freed from Parliament,” he said.  “I fail to understand why the Congress is not using his experience.”

What does it convey?  Is it not the demand to make him the party chief as Rahul proved disastrous and opts to step down and even deteriorating health of Sonia Gandhi, which no more remains a secret?

In fact, Sibal made it clear that they (G-23) wanted the party to be strengthened in every state and every village because a weak Congress would mean a weak country. He also took a swipe at PM Narendra Modi, saying: “Today, the problem India confronts is that she has a rajneta (leader) whose sole ambition is to empower his party and not the people of the country.”

And, the meeting was noticed in Delhi with Congress spokesperson Abhishek Manu Singhvi pointing out that the party would be better served if the leaders campaigned in election-going states. Kerala, Tamil Nadu, West Bengal, and Assam, and the Union Territory Puducherry will go to the polls starting in March; the results will be announced on May 2.

Though, Azad avoided criticising the Congress and spoke of how he was impressed by the Gandhian philosophy while a student of SP College in Srinagar in 1969, yet he too did not mince words when he finds fault with the party leadership for not utilizing his services as ‘star campaigner’ in the recent elections. He took some time to criticise the BJP government for dividing the state of Jammu and Kashmir (J&K) in two UTs in 2019.  “One-and-a-half years ago, we were dismembered… the state was shredded into pieces and today we are being divided in the name of religion and regions,” he added.

He said he will keep fighting for statehood from outside Parliament till he realises. He told the gathering that he might have retired from Rajya Sabha, not yet from active politics.  In other words, reiterating that he is preparing the fight till finish, for the party leadership.

Are Elders a ‘Burden’ on Others? – For Youth:On Old Age- Part IV

Covid-19 Realities; States need to be blamed, not Centre

Human Relations Important for the Elders; For Youth & Old Age-Part-III