Sao Paulo:  Even though he’s behind bars, Brazil’s Luiz Inacio Lula da Silva was set to secure his leftist party’s nomination Saturday, maintaining him as the most-watched candidate in the country’s least predictable presidential election for decades.

Three big party conventions were underway to nominate heavyweight candidates two months before the first round of voting on October 7 in Latin America’s dominant economy.

Center-left environmental campaigner Marina Silva was to be crowned by her Rede party in Brasilia. Also in the capital, former Sao Paulo governor and establishment heavyweight Geraldo Alckmin secured the nod from the center-right Brazilian Social Democratic Party, or PSDB.

“Go Brazil, Geraldo for president!” about 1,000 supporters chanted before Alckmin was nominated in an almost unanimous vote.

But while both Silva and Alckmin are serious contenders in a likely match-up against controversial right-winger Jair Bolsonaro, it was Lula’s highly unusual convention in Sao Paulo that overshadowed proceedings.

Lula is in prison in the southern city of Curitiba, serving a 12-year sentence for corruption and is likely to be barred from the ballot. But his Workers’ Party is acting as if it’s business as normal in Lula’s bid for a return to office after his largely popular two terms from 2003-2010.

While he wasn’t able to attend the Sao Paulo convention, the approximately 2,000 attendees were issued Lula masks and their enthusiasm was undimmed.

“They thought the coup would end with Lula in prison, with the people abandoning Lula, but the opposite has happened,” said Paulo Henrique Barbosa Mateus, a 27-year-old unemployed man at the convention, voicing the faithful’s belief that Lula’s trial was trumped up to prevent him from running.

“We’ve got even stronger. Our role is to reinforce his candidacy and make sure he gets his right to be in the campaign, because he is innocent.”

Supporters have one remarkable factor on their side: despite his imprisonment and the corruption scandal, Lula remains far ahead in the polls.

Surveys show him with near double the support of all other main candidates in a first round, crushing any runner-up in the second decisive round two weeks later.

Passing the torch?: Lula is waiting for final court judgment on whether he can run and it doesn’t look good: under current law anyone losing an appeal of a criminal conviction is not allowed on the ballot.

So despite the left’s almost cult-like backing, there was close attention being paid to the Workers’ Party choice for vice president — a figure who could end up standing in for the imprisoned leader. 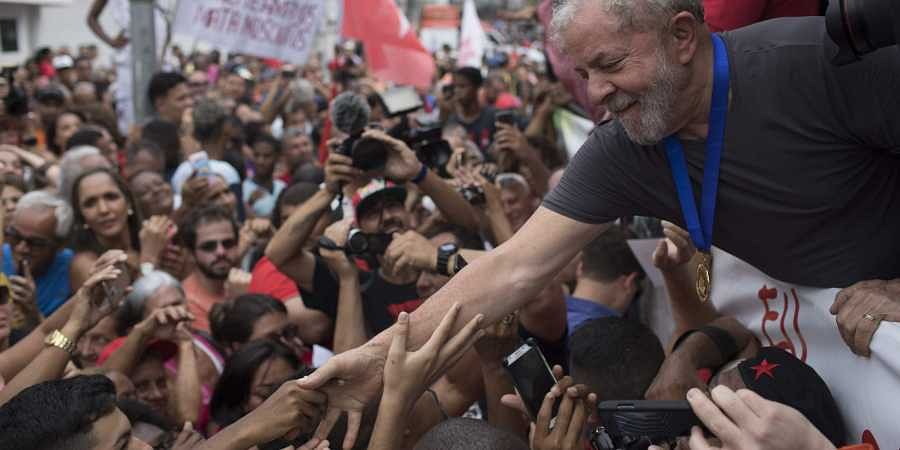 One high-profile possibility is former Sao Paulo mayor Fernando Haddad. A powerful politician, he has signed on to Lula’s legal team, giving him easy access to the prison, and he would be well placed to inherit Lula’s electorate.

But the party appears to be torn over the choice, with some fearful of any move that might suggest giving up on the main goal of somehow getting Lula back into the presidential palace.

Alckmin has already named Senator Ana Amelia, who is expected to help him in the south of the country and eat into conservative support for Bolsonaro.

And if Alckmin has gone for a female VP, Silva has struck a pact with a man, Eduardo Jorge, from Brazil’s Green Party.

Bolsonaro, who has positioned himself as a radical right-winger appealing to Brazilians’ fury over crime and corruption, has yet to find his running mate. Names thrown around in Brazilian media reports have included a former astronaut, a member of the royal family and a general.

The problem facing all candidates is the level of voter disgust and apathy.

Two polls show that 33 or 41 percent of voters are undecided or not participating in an election that doesn’t include Lula. If Lula was on the ballot, that number would drop but still account for about a quarter of voters.

Pawar says he worried about Gadkari

MS Dhoni claims consistency in selection is his team’s ‘matra’: After...

‘Lipstick Under My Burkha’ gets release date in US

KCR appeals to vote for TRS as it alone can redress...