The entire country on Sunday watched with their heads bowed in shame, the savage conduct of our lawmakers in Rajya Sabha, one of the temples of democratic India.   The proceedings to pass the long standing agriculture reform Bills was marked by an unprecedented ‘drama’ by the Opposition parties throwing Covid19 precautions of social distancing to winds.  These are our leaders, who expect us to follow and vote for them in elections!

The unruly behavior of the Opposition parties, resembling mob violence, thoroughly exposed their dubious intentions and sanctimonious nature. Every political party wants to show themselves to be standing with farmers, whom they neglected all these years and betrayed them with false promise of agricultural reforms.  And, when the incumbent Government wants to implement these reforms they play politics to deny yet another feather added to Prime Minister Narendra Modi’s cap as he is, undeniably in a great hurry to bring in reforms and develop India with a Missionary zeal.

The people in the country are in no mood to be fooled anymore and can see through their (Opposition’s) dirty and nauseating politics.  This was just a stage enacted drama as the result of passing these Bills was a foregone conclusion. The shouting brigade led by Mr.Derek O’Brien of TMC created a ruckus by entering into the well of the House along with others and tore the Rule Book creating a pandemonium.  Added to that his statement made in the lawns of Parliament too was disgusting to watch and listen.

(Interestingly, at the time of posting this article, the Chairman of Rajya Sabha, has suspended the erring MPs for a week, including Derek O’Brien)

Till yesterday, the Congress has positioned itself in the leadership role to oppose these Bills and TMC wanted to hijack the event and project themselves as the sole leader and a champion of farmers’ cause.  The other fence sitters in regional and marginal parties were busy negotiating favors from the ruling party for voting in favor.  It is a common knowledge that these are the occasions when favors are traded for personal benefits.  No Opposition party is serious about farmer’s woes and bother about their welfare; otherwise they will not oppose these reforms which will greatly benefit them. 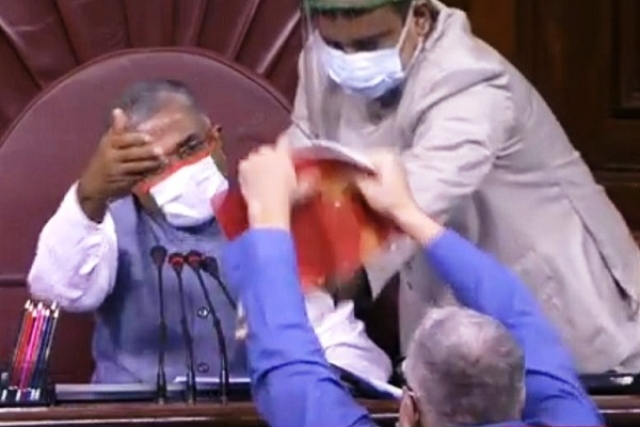 The commotion created in the Parliament forced the Speaker of the House to adopt a voice vote and in the melee these reform Bills were passed without knowing who voted in favor or against.  Mission accomplished, the Opposition parties returned to their bases, satisfied after a day’s hard work and with the sense that their ploy to fool the people has gone unnoticed.

A new barometer has emerged in the country to know the status of country’s long-term health.  Any Opposition to a reform by Modi government is a sure indicator that something right is happening in the country, which will benefit the people in long run.  With this Bill the double standards of the Shiromani Akali Dal (SAD), an ally of the ruling party, also stands exposed.

The resignation of Mrs.Harsimrat Kaur, Union Minister is very sad moment because Akalis were the allies of NDA since the beginning.  Parting from the NDA alliance now shows their political opportunism and their compulsion to regain the lost ground in Punjab politics and project themselves as true champions of farmers in the state.  The reply of Mrs.Kaur to a pointed question on NDTV on September 18, 2020 that “whether she believes that Modi is anti-farmer, her reply was an emphatic “No” tells everything and shows that honest intentions of Narendra Modi are difficult to deny even by his adversaries.

It is worthwhile to understand the issue at hand which made our lawmakers to behave in such a deplorable manner.  Three Bills on long-pending agriculture reforms were tabled in Rajya Sabha after being passed in the Lower House.  Without going into the technicalities of these Bills let me analyze and explain the issue in a simple layman’s language for the benefit of the netizens.

The need to benefit the hands that feed us in India is a long cherish dream of well meaning political leaders in the country.  Slogan like Jai Jawan Jai Kisan is an example of one such desire.   Later, the politics changed its character in the country where self-interest and personal considerations became priorities of the leaders and agriculture reforms took a back seat.

The farmers in our country are the poorest; they toil each day in fields to keep the country well fed, and in return face exploitation.  Most of us in cities buy our groceries and vegetables in super markets or sometimes nearby kirana shops at rates, which are approximately 6 to 8 times of the cost which a farmer gets.  For example, if you buy a kg of potato in a Super Market for Rs.40/- a farmer receive just Rs.5 or 6 for all his efforts. 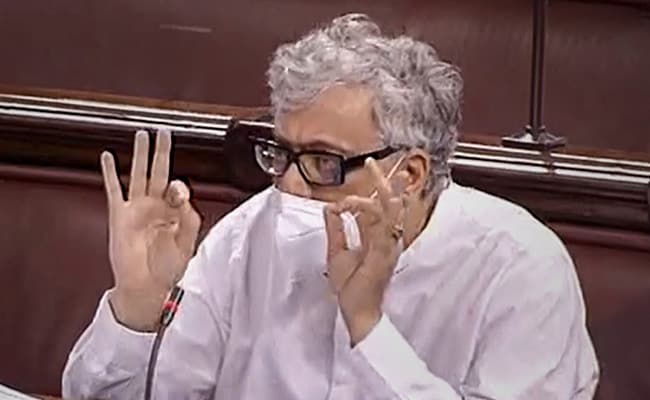 This happens because the sale of farmers produce in India is done through local mandis with their marked jurisdictions in every state through an Agricultural Produce Market Committee (APMC), which is a marketing Board established by the state government.   This Committee provides physical space for the market, other infrastructural facilities and has licensed traders and commission agents called Arhitiyas in north India.  Farmers are not allowed to sell their produce outside these mandis making them vulnerable to exploitation.

The APMC has the monopoly and no competition is allowed.  The Committee fixes the price of the produce for the farmer to which commissions to agents, mandi fee, service charges and the state government tax are added to arrive at the final cost of the produce.  Licensed traders buy the produce from the mandis and take it to wholesale markets and finally to retailers, who buy from them before it reach the consumers.  The entire process escalates the cost of the produce several times without benefitting the farmers who grows them.

The Government of India also buys paddy, wheat and few other agriculture products through Food Corporation of India (FCI) at a fixed price known as Minimum Support Price (MSP) so that farmers have assured annual income from their produce and also help them in times of crop loss due to natural calamities or during bumper crop production.   These purchases are essentially for Public Distribution Systems (PDS) by the Government of India.

Under the new Law after the reform, the farmers and traders will have a lot of freedom and choice to sell and purchase of agri-produce.  The farmers will now be able to sell their produce anywhere in India in addition to the existing state mandis notified under APMC.  This will free the farmers from the clutches of regulated agriculture markets in the country.  The farmers need not pay any cess or levy for the sale of their produce under this act.  Further, there will be a separate dispute resolution mechanism for the farmers.

The law will allow farmers an option of contract farming empowering them to engage with processors, wholesalers, aggregators, large retailers, exporters on a level playing field without any fear of exploitation.  It will transfer the risk of market unpredictability from the farmer to the sponsor and also enable the farmer to access modern technology and better inputs.  It will reduce cost of marketing and improve income of farmers.

The greatest benefit of this agri-reform will be that it will act as a catalyst to attract private sector, which can lead to improved infrastructure and build supply chains for Indian farm produce to national and global markets.  Farmers can engage in direct marketing thereby eliminating intermediaries resulting in full realization of price.

There is adequate protection provided for farmers under this law. The sale, lease and mortgage of farmers’ land are totally prohibited and farmers land is also protected against any recovery.  An effective redress system is provided for dispute resolution within a definite time- frame.  There are several pro-farmers provisions in the law which will greatly benefit them after 70 years of independence.

The question is if there are so many benefits, then why are farmers agitating?

There is a systematic campaign by the Opposition parties to divert the focus of agriculture reforms to show Modi government in a bad light.  They have sown a seed of suspicion in farmers’ mind that once these Bills are passed, it would pave the way for dismantling the Minimum Support Price ((MSP) system and leave the farming community at the mercy of big Corporate.  Congress says that this Law is a ‘death warrant’ for farmers.  The same party in their 2019 election manifesto promised to repeal the APMC Act and make agricultural produce free from restrictions.  Now they have turned around and finding excuses in commas and punctuations in the Bill.

Prime Minister has repeatedly expressed his government’s commitment to continue the MSP scheme in future to help the farmers.  He had directly addressed the people of the country and clarified in unequivocal terms that the reform Bills, in fact will lead to increased profits for farmers.   And that the Opposition is backed by vested interested in the farming society are trying to mislead the farmers.  They have been successful in encouraging the farmers in Punjab and Haryana to agitate and take to streets.  In Punjab the most affected are the Commission agents, rich traders and the state government that control the local mandis and will lose their fee and taxes. The farmers are not as strong as in Maharashtra where the farming lobby is highly informed of the benefits of the reforms.

Even the Agriculture Minister Narendra Singh Tomar said the MSP for farmers will continue.  He also promised that reforms will not encroach upon the APMC Acts of states and they will continue.  These Bills are only to get farmers get better prices for their produce with more competition as they will be free to sell their produce to anyone and they will not have to pay any taxes too.  This will increase competition and promote private investment and in the development of farm sector as well as infrastructure and generate employment.

The Minister also stressed that because of these reforms farmers will be able to connect directly with big business and exporters and will be able to make farming a profitable proposition hereafter.

It was obvious from the proceedings in the Rajya Sabha that no Opposition leader was interested to discuss the reform Bills.  They were more interested in postponing the tabling of the Bill in the House by making suggestions like referring the Bill to a Select Committee for a review.  These are common delaying tactics of Opposition parties so that the Bill is not made into a Law under Modi government, which they feel, will become an advantage in the upcoming Bihar elections this year-end.

No government in the history of independent India has achieved so much in such a short time in making Laws on crucial matters plaguing the country since a long time.  It needs honest intention, firm conviction and welfare of the people at large as the primary objective and then only one can succeed.  It is very clear that the Master is at work, who knows the pulse of the people and tricks of the trade, which can be most effective in a country like India.

The Other Side Of The Coin: Is Trump A Buffoon Or Most Envious Prez US Ever Had?

An ‘Indian’ in the White House?