Brumandiho: A dam collapse in southeast Brazil unleashed a torrent of mud on a riverside town and surrounding farmland Friday, destroying houses, leaving 200 people missing and raising fears of a number of deaths, according to officials.

President Jair Bolsonaro was to visit the affected zone, around the town of Brumadinho which is located near the city of Belo Horizonte, on Saturday, a government spokesman said.
His government, facing its first big emergency since taking office in the new year, set up urgent coordination between the defense, environment and mining ministries to bolster operations by the state of Minas Gerais.

Access to Brumaldinho — population 39,000 — was difficult after the mud cut across roads, hampering officials’ ability to determine the scope and gravity of the disaster.

In the statement, the fire service said it confirmed “the disappearance of approximately 200 people.” 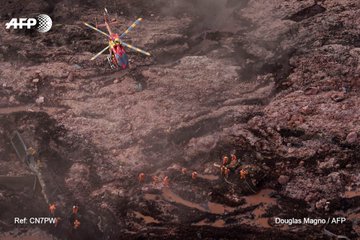 People stuck in mud:Television images showed helicopters being used to rescue people stuck in mud, and a wide swath of destruction carved through vegetation and farmland, in which damaged and destroyed houses were dotted.

Four people were taken to hospital and were in a stable condition.

A separate statement by the environment ministry said that “the initial preoccupation of the federal government is the rescue of victims, giving support to the region, and protecting water-catchment areas.”

The dam belonged to Brazil’s giant mining company Vale, which confirmed its collapse and said “the total priority is to protect the lives of employees and inhabitants.”

It did not say what caused the collapse.

Shares in Vale fell around 10 percent in New York trading. The Sao Paulo stock market was closed Friday for a holiday.

Bolsonaro, in an interview with Brumadinho’s Radio Regional FM, said he “deeply regretted” the dam collapse, which “is possibly more serious than thought” because it might have swept away Vale workers.

Friday’s disaster recalled trauma from a 2015 dam break in a different part of the same state of Minas Gerais, in Mariana, in which 19 people died.

That accident three years ago released millions of tons of toxic iron waste along hundreds of kilometers (miles), causing what is considered the country’s worst environmental disaster. Vale was joint operator of that dam, along with the Anglo-Australian group BHP.

Evacuations: An emergency team from the Ibama environmental protection agency had been dispatched to the zone impacted by Friday’s dam collapse to determine the damage, Environment Minister Ricardo Salles told the G1 news website. He was to visit Brumaldinho late Friday.

Ibama estimated that the collapse had released a million tons of water and mud, according to the Estadao newspaper.

Civil defense officials said people living in low-lying areas in the town had been evacuated.

Brumadinho’s municipality issued an alert on social media warning residents to move away from the Paraopeba river that the dam had been holding back.

The town is best known to tourists for Inhotim, an outdoor contemporary art museum, which was evacuated as a precaution. The venue receives 35,000 visitors a month.

On the cusp of 100th Test, Delhi’s ‘lambu’ stands tall

Modi slams Mamata, says instead of being ‘Didi’ to people she...

‘Poribortan will happen in Delhi instead of Bengal’: Mamata hits back...