Floods and landslides triggered by torrential rain deepened the crisis in the northeast on Monday, with more deaths and devastation being reported in Assam, Meghalaya and Arunachal Pradesh, even as the central government promised to provide assistance to the region that has so far reported 131 fatalities.

Union home minister Amit Shah said an interministerial central team will visit the flood-affected areas of Assam and Meghalaya to assess the damage. After speaking to chief ministers Himanta Biswa Sarma and Conrad Sangma, he said the Centre stood firmly with the people of the region.

As per a bulletin issued by the Assam State Disaster Management Authority (ASDMA), the state recorded 11 deaths on Monday in eight of the 32 flood-affected districts. Seven people, including two children, were reported missing in five other districts. Those dead included two policemen posted in Nagaon district who drowned in flood waters at Kampur late on Sunday while trying to help people marooned in the floods.

According to ASDMA, the amount of rainfall received this year in the months of May and June is above the normal average from past years. “It is an extreme weather event this season and it has put extra strain on rescue and relief efforts and also on the affected people,” said GD Tripathi, CEO, ASDMA.

As per data issued by India Meteorological Department (IMD) on June 16, Meghalaya recorded 172% more rainfall than normal in the past week, Assam witnessed 100% more rainfall while Arunachal Pradesh recorded a 28% surplus than normal. 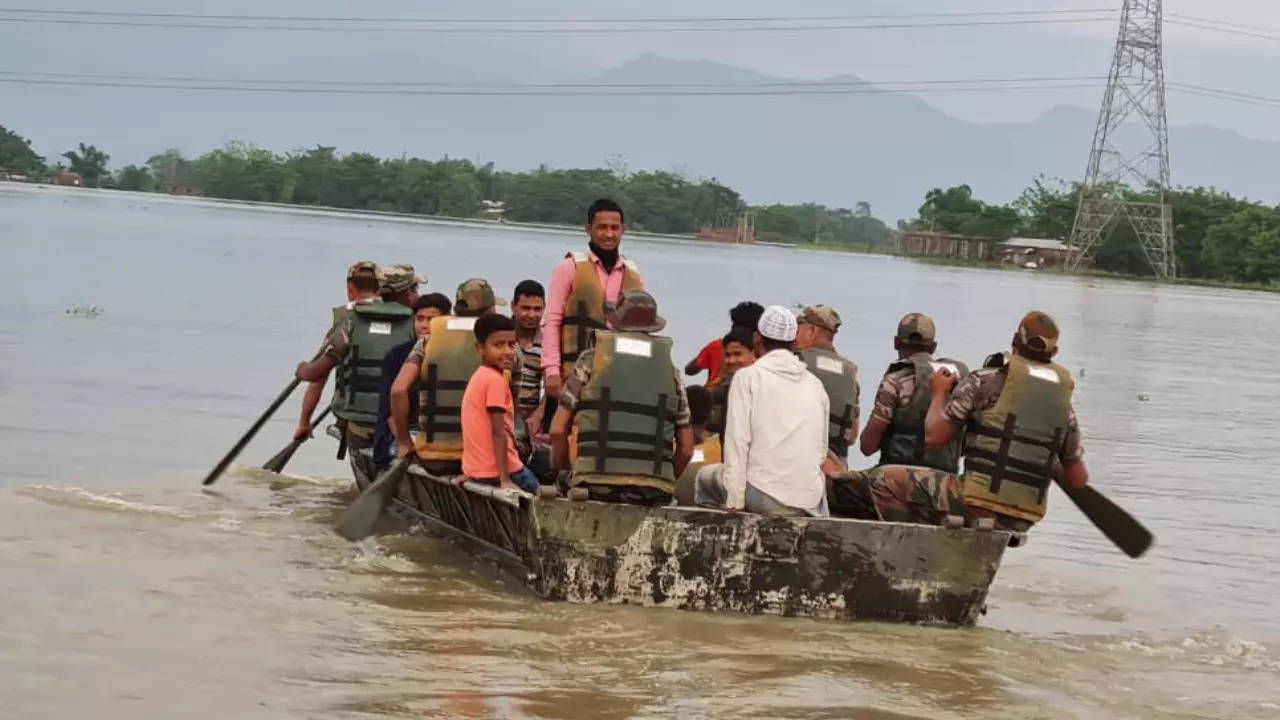 The Guwahati office of the India Meteorological Department (IMD) issued a fresh rainfall warning for all seven states in the region on Monday. As per the bulletin, thunderstorms and heavy rainfall were likely to take place at areas in Assam, Meghalaya, Arunachal Pradesh, Mizoram, Nagaland, Manipur and Tripura till Friday.

Over 4.7 million people are at present affected by flooding across Assam. A total of 231,819 people who fled their homes to escape the flood waters are currently living in 1,425 relief camps, according to the state government.

The flood waters have reached national parks and wildlife sanctuaries in the state and till Monday morning, 18% of the total area of the Kaziranga National Park and Tiger Reserve (KNPTR) was submerged.

In neighbouring Meghalaya, while no deaths were recorded on Monday, landslides were reported in a few places in West Khasi Hills and East Jaintia Hills. A tunnel on National Highway 6, which was blocked on Sunday due to debris from landslides, continued to remain closed, affecting the movement of vehicles.

In Arunachal Pradesh, a 16-year-old boy was killed in a landslide late on Sunday, taking the total deaths due to rainfall-related landslides in the state since April to 9. Three employees of a hotel were reported missing on Sunday due to a landslide in West Kameng district.

In Manipur, several villages in Jiribam and Pherzawl districts were submerged with the rise of the water level of the Barak River due to incessant rainfall in the last few days.

In Assam, according to a bulletin issued by the Central Water Commission (CWC), Beki, Pagladiya, Puthimari, Kopili and Brahmaputra rivers were flowing above the danger level at several places. Assam chief minister Himanta Biswa Sarma chaired a review meeting with deputy commissioners of all districts and issued instructions to provide immediate relief to those affected by floods and not wait for official protocols and sanctions. “The district officials should ensure that relief measures including food and drinking water are provided immediately to those affected who reach relief camps instead of focusing on head counts and assessment. Medical check-up should also be conducted in the camps,” Sarma said.

Later in the day, Sarma said that an Indian Air Force (IAF) plane will on Tuesday carry 100,000 litres of petrol and diesel to Silchar in Barak Valley, where road communication has been affected due to heavy rainfall and landslides.

Sarma said that besides National Disaster Response Force and SDRF personnel, several columns of the Indian Army were also involved in rescue and relief efforts across the state.

The Opposition Congress in Assam, meanwhile, demanded that the floods in Assam be declared a national calamity. In a letter to Prime Minister Narendra Modi, leader of the opposition in the state assembly Debabrata Saikia sought ₹20,000 crore as special relief.

In Meghalaya, 40 lives have been lost till date from April 1, while 633,924 people from 918 villages have been affected. 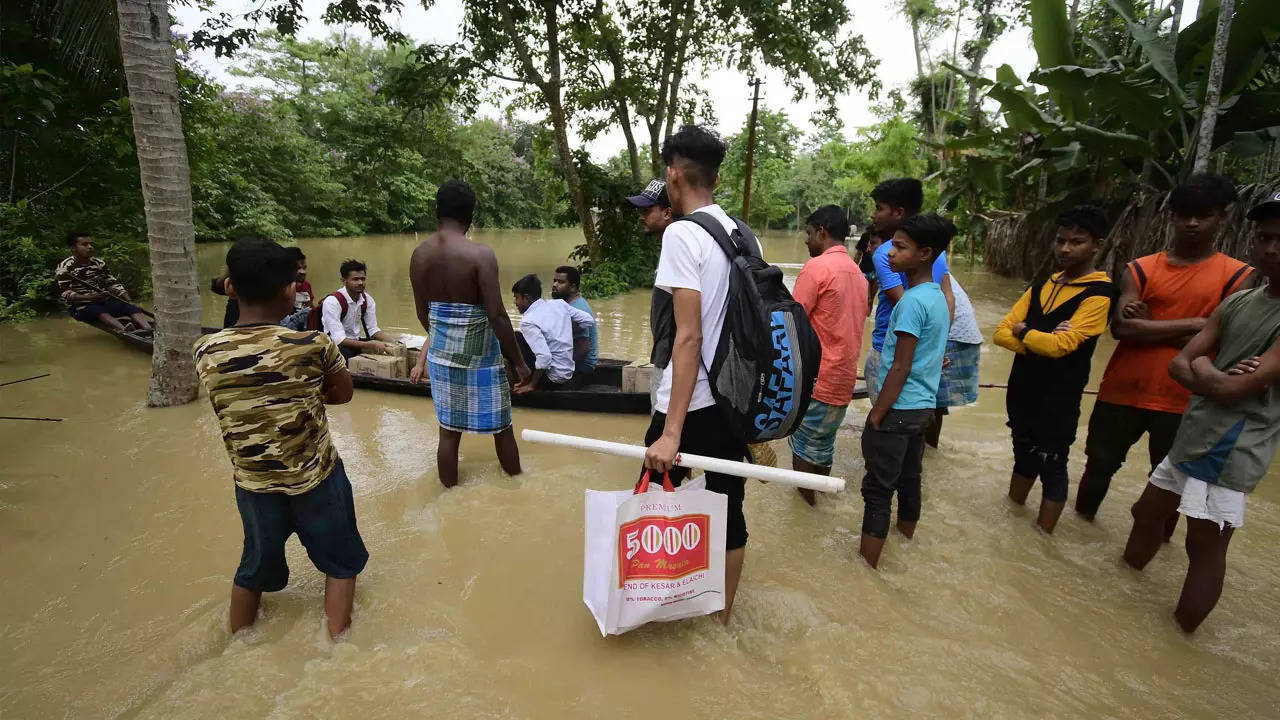 Chief minister Conrad Sangma said the state government has written to the Union home ministry, seeking financial assistance of ₹300 crore from the Centre to meet the losses sustained by flood and landslides.

An official in Tripura said one person was injured, while over 100 houses in different parts of the state were damaged due to floods on Monday. At present, 602 families are residing in 24 relief camps in the state. In Mizoram, the state government has ordered schools to remain shut till Tuesday due to heavy rain.

According to experts,the intensity of devastation brought by floods is increasing every year due to climate crisis. “Catastrophes related to floods in Assam are increasing gradually with each passing year, and since 2017, there has been an increase in flooding and destruction. Climate change is one of the factors, which coupled with infrastructural interventions on the ground has led to this scenario. Each cycle of floods affects many in Assam and by the time they are able to recover slightly the next cycle of floods happen. These scenario will only increase in coming years in Assam and rest of northeast,” said Mirza Zulfiqur Rahman, an independent water expert based in Guwahati.

Be sympathetic to needs of deprived sections: Prez to IAS trainees

Reese Witherspoon to return as Tracy Flick for ‘Election’ sequel

Sri Lanka to resume flights from Chennai to Jaffna from Dec...