Huawei on Thursday launched the Mate 9 smartphone at an event in Munich. The smartphone bears a dual rear camera setup designed in collaboration with Leica, which is certainly the highlight feature. It will be made available in China, France, Germany, Italy, Japan, Kuwait, Malaysia, Saudi Arabia, Thailand, and the UAE in the first wave of launches, with a suggested retail price of EUR 699 (roughly Rs. 51,600) inclusive of taxes.

The dual-SIM Huawei Mate 9 runs EMUI 5.0 based on Android 7.0 Nougat, and sports a 5.9-inch full-HD (1080×1920 pixels) IPS display. It is powered by the HiSilicon Kirin 960 octa-core SoC with four Cortex-A73 cores clocked at 2.4GHz, and four Cortex-A53 cores clocked at 1.8GHz. The SoC features the recently unveiled ARM Mali-G71 GPU, coupled with 4GB of RAM. It bears a fingerprint sensor on the rear panel, which supports gestures.

Getting to the cameras, Huawei says the Mate 9 is getting the ‘second-generation Leica dual-lens camera’, which has been ‘co-engineered’ with Leica. To recall, the Huawei P9 was the first to sport the Leica dual rear camera setup. The Huawei Mate 9 bears a 20-megapixel monochrome sensor and a 12-megapixel RGB sensor, both with f/2.2 apertures.

The combination is meant to provide improved colour accuracy, depth perception, and contrast. The rear camera features optical image stabilisation (OIS), Hybrid Zoom, dual-tone dual-LED flash, and something Huawei is calling a ‘4-in-1’ Hybrid Autofocus system, with contrast, depth, laser, and phase detection autofocus systems all combined. On the front, the smartphone bears an 8-megapixel sensor with an f/1.9 aperture.

The Mate 9 comes with 64GB of inbuilt storage that’s expandable via microSD card (up to 256GB, hybrid dual-SIM design), and sports a 4000mAh battery with SuperCharge technology that’s said to deliver a day’s worth of charge in 20 minutes. The smartphone weighs in at 190 grams, and has dimensions of 156.9×78.9×7.9mm. Colour variants the smartphone will be available in are Black, Space Gray, Moonlight Silver, Champagne Gold, Mocha Brown, and Ceramic White. 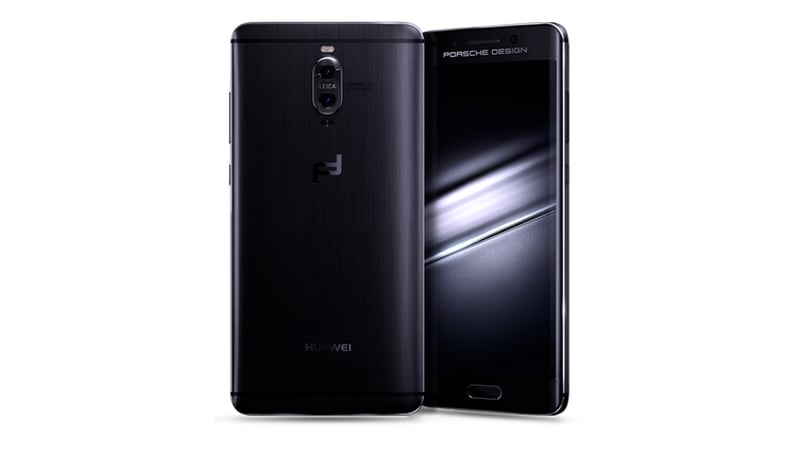 The Porsche Design Huawei Mate 9, which will only be shipped in a Graphite Black colour variant, will be available in the European Porsche Design Stores starting in late December. It will also be available in January 2017 at Porsche Design Stores worldwide (except USA), and select Huawei retail stores in Asia, Middle East, and Europe. Apart from the design differences, the singe-SIM smartphone also bears a smaller, higher resolution display – a 5.5-inch QHD (1440×2560 pixels) AMOLED display – sports 6GB of RAM, and 256GB of inbuilt storage with no card slot. It weighs less at 169 grams, and measures 152x75x7.5mm.