Brisbane: Australia cruised to a crushing 10-wicket win over England to go one-up in the Ashes series in the opening Test at the Gabba on Monday, with captain Steve Smith praising his team’s character.

Openers David Warner and Cameron Bancroft added to England’s agony by peeling off the required runs without the loss of a wicket before lunch on the final day.

Warner finished unbeaten on 87 off 119 balls with newcomer Bancroft hitting the winning runs to remain 82 not out off 182 balls in Australia’s 173 without loss.

In the process, they broke an 87-year-old Test record for the all-time highest unbeaten opening partnership in a successful Test chase. “We had to show some really good character throughout. Obviously losing the toss, and the wicket was a lot slower than we anticipated it would be. We had to work really hard,” said Australian captain Steve Smith.

“I’m pleased with the way we have played. Bowling first at The Gabba, it’s hard. The bowlers had to be on. The way we pulled it back to win from the position we were in it’s extremely pleasing. I’m proud of the way the boys fought.”

The Australians only needed 56 runs on the final morning go one up after England imploded on Sunday’s fourth day. England captain Joe Root said the result did not tell the full story.

“For three days we were excellent. Bar Steve’s knock we were right in it,” he said, referring to Smith’s battling first innings century.

“It’s frustrating. We have to move on quickly and make sure we don’t make the same mistakes in Adelaide.”

It was Warner’s 25th Test fifty and ninth in the Ashes, while debutant Bancroft posted his first half-century in only his second Test innings.

“It was good fun, to share a good partnership was nice. To get the win in the end was good,” said Bancroft, who was allegedly headbutted by England wicketkeeper Jonny Bairstow in a late-night altercation in Perth earlier in the tour.

An England and Wales Cricket Board statement confirmed team management have asked Bairstow about the alleged incident.

Warner said it was great to get the win without losing a wicket.

“That’s what we cherish, coming out being disciplined to try and get the job done as best as possible,” he said. 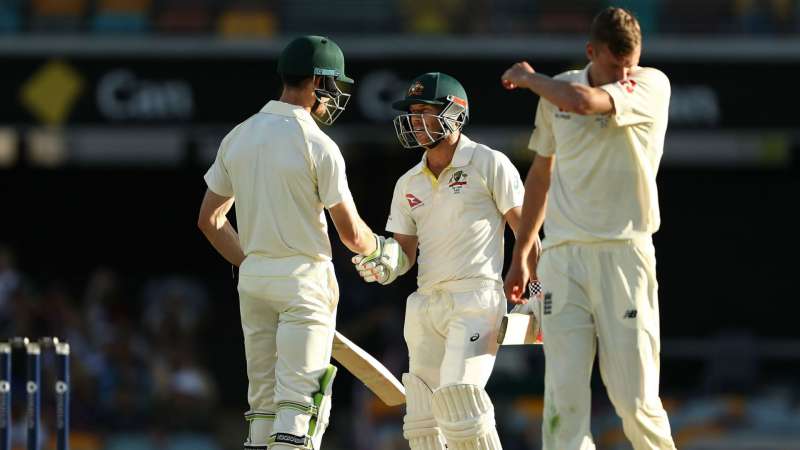 It was an attritional battle between the traditional rivals over the first three days of the Test, raising England’s hopes of a first win at the ground in just over three decades.

England were knocked over for 195 off 71.4 overs, losing their last six wickets for 82, to set Australia an unthreatening target to chase down in the remaining four sessions of play.

Australia stretched their unbeaten record at their Gabba fortress to 29 years since their last defeat to Viv Richards’ West Indies team in 1988.

England have not won in Brisbane in 31 years, a stretch of eight Ashes Tests.

The five-Test series heads to Adelaide Oval for the first-ever Ashes day-night Test, starting on Saturday.

One option is to cancel T20 World Cup this year: Sangakkara

Stuck in Germany for over 3 months, Anand to finally return home

Irrfan’s wife Sutapa pens an emotional note a month after his...